Church Street’s Red Onion Café will relocate to Charlotte after 30 years of servicing downtown Burlington. In a press release last Thursday, owner Mickey West cited financial troubles brought on by the COVID-19 pandemic as the reason for the move. 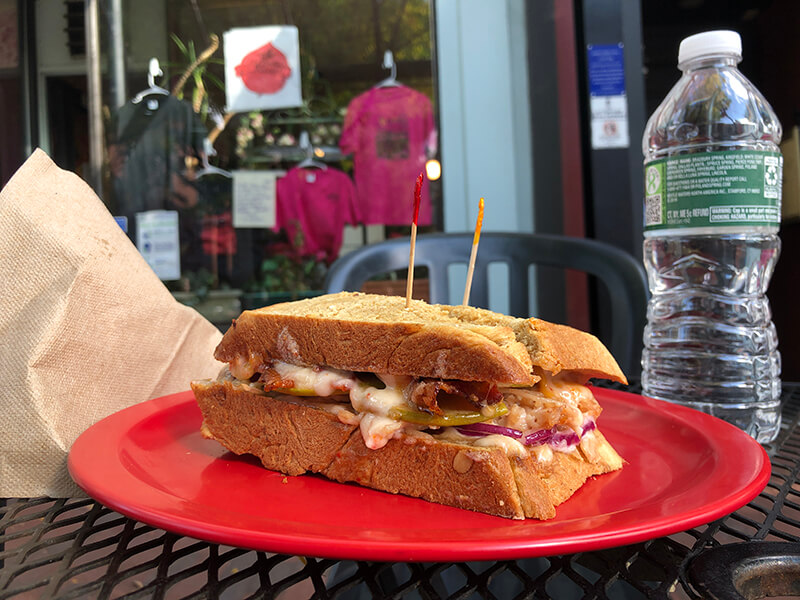 The Famous Red Onion sandwich will be available to Charlotters in their own town starting this November. Photo by Tyler Lederer.

“Between the high rent on Church Street and the dwindling foot traffic due to people increasingly working from home, making a move to Charlotte was a no-brainer.”

The move is the latest action West has taken to preserve her business. In June of this year, a local organizer set up a Go-Fund-Me page on her behalf, seeking $20,000. As of Oct. 13, only $2,995 has been raised.

The restaurant is known for its sandwiches, such as the namesake “The Famous Red Onion,” which combines apples, turkey, bacon, onions and cheddar. The sandwich comes on a variety of different breads, such as Honey Oat. It combines tang, sauciness and crunch and quickly became its staple dish.

Social media users were upset by the news of the move.

“Loved their sandwiches during my breaks working at Red Square,” said Nicholas Von Shats, a Reddit user and Champlain College alumnus. While the news shocked him, as an aspiring restaurateur, he was also interested in what could replace it, he said.

Not everyone shared his enthusiasm for the future. On the opposite end, Facebook user Joseph Pensak was more concerned about the implications of the move.

“I’m very disappointed,” he said. “Red Onion had character and funkiness and that is disappearing on Church Street.”

Other Facebook and Reddit users questioned the value of Church Street and complained about the lack of businesses in Charlotte.

The Red Onion will shut its doors for good on Oct. 27 at 4:00 p.m., according a sign posted at the restaurant’s Burlington location. It will move to Charlotte Crossings on Route 7. The property already houses restaurant, retail and office space and was the center of a food truck permitting controversy this summer. The Red Onion will open there this November pending approval from the town.

Editor’s note: This article is by Tyler Lederer, who is a student reporter with the Community News Service, a collaboration with the University of Vermont’s Reporting & Documentary Storytelling program.