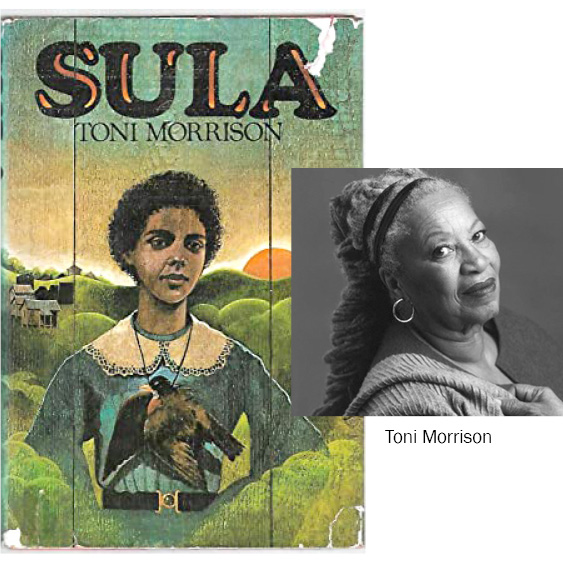 Hello, Readers and Others. I hope this finds you well and enjoying these late summer days. I am noticing, here and there, trees tinged with red, and there has definitely been a nip in the air these last few mornings. But what a summer it has been! With all the difficulty and tumult, nature has really given us a break, a gift, with the weather. I hope it continues for a few more weeks. What beautiful days we have had!

I have read (and reread) a few really good books lately, coincidentally all by female authors. A recent and extremely worthwhile reread was Sula by Toni Morrison, which many of us read back in the 70s and 80s, close to when it was first published in 1973. It made a big impression on me back in the day, and I find that I have always had tucked somewhere in my memory an image of Sula striding into town in a red dress…heroine or anti-heroine, I couldn’t remember. Upon rereading, I’m not sure there is any scene involving Sula striding into town in any colored dress. And there is so much more to the tale than I remembered.

This short novel is vivid and brimming with striking imagery and beautifully rendered characters. It dawned on me, upon rereading, that it is primarily about a friendship (which I had forgotten) between Nel Wright and Sula Peace, who are both 12 in 1922. “Nel was the color of wet sandpaper,” Morrison writes, “just dark enough to escape the blows of the pitch-black truebloods and the contempt of old women who worried about such things as bad blood mixtures and knew that the origins of a mule and a mulatto were one and the same…Sula was a heavy brown with large quiet eyes, one of which featured a birthmark that spread through the middle of the lid toward the eyebrow, shaped something like a stemmed rose. It gave her otherwise plain face a broken excitement and blue-blade threat like the keloid scar of the razored man who sometimes played checkers with her grandmother. The birthmark was to grow darker as the years passed, but now it was the same shade as her gold-flecked eyes, which, to the end, were as steady and clean as rain.” As you can see, the writing here is so rich and textured, so arresting, rather ominous; I had forgotten.

Sula and Nel are very different from one another but quickly become fast friends. “Their friendship was as intense as it was sudden. They found relief in each other’s personality. Although both were unshaped, formless things, Nel seemed stronger and more consistent than Sula, who could hardly be counted on to sustain any emotion for more than three minutes.” Sula and Nel grow up together in a small town: Medallion, Ohio. They stand up to bullies together, play games together, create fantasies together, and one day become entangled in a terrible secret, which might or might not have been witnessed by Shadrack, a “handsome but ravaged” World War I vet and madman who lives in a cottage out by the river, founder (and for many years the only celebrant) of National Suicide Day.

Oh! It seems I was somewhat accurate in my remembering of Sula from back when I was in my early twenties—for, thumbing through the novel just now, I discovered that she did make an entrance, rather the way I had recalled, though not in a red dress, but rather, a black one. Yes, indeed, Sula returned to Medallion after many years away, “accompanied by a plague of robins…She was dressed in a manner that was as close to a movie star as anyone would ever see. A black crepe dress splashed with zinnias, foxtails, a black felt hat with the veil of net lowered over one eye. In her right hand was a black purse with a beaded clasp and in her left a red leather traveling case, so small, so charming—no one had seen anything like it before.”

Okay, so I didn’t remember the dead robins, and the dress had changed color, but something about this homecoming had never ceased to shimmer in my mind’s eye. That, and the sense that Sula was different. I remembered that, too. She was bigger than life. Beyond the rules. She marched, sashayed, and strode to the beat of her own drum. That had all stayed with me. Was she good? Was she evil? A hero? A pariah? Kind? Cruel? It’s not clear, and not everyone agreed, but many who knew her or had heard the stories about her saw her as devouring and evil. Morrison writes that the townspeople’s evidence against Sula “was contrived, but their conclusions about her were not. Sula was distinctly different.”

When she wrote Sula, Morrison was living in Queens, strapped for money, commuting to Manhattan for an office job, leaving her children to child-minders and the public school in the fall and winter, and to her parents in the summer months. “Every rent payment was an event,” she writes, in the foreword. But she was in good company. She wasn’t alone. She had a community. Hers was the condition of every other single/separated female parent she knew. “The things we traded? Time, food, money, clothes, laughter, memory—and daring. Daring especially, because in the late 60s, with so many dead detained, or silenced, there could be no turning back simply because there was no ‘back’ back there. Cut adrift, so to speak, we found it possible to think up things, try things, explore. Use what was known and tried and investigate what was not. … Nobody was minding us, so we minded ourselves.”

Morrison explains that she and her cohorts came to think of themselves as their own salvation, their own best friends. She got to wondering what that could have meant to women in the 1920s. “The image of the woman who was both envied and cautioned against came to mind.” And voila, Sula was born.

Morrison says that she finds outlaw women fascinating, “not always for their behavior, but because historically women are seen as naturally disruptive and their status is an illegal one from birth if it is not under the rule of men. In much literature a woman’s escape from male rule led to regret, misery, if not complete disaster.” Morrison writes that she wanted to “explore the consequences of what that escape might be, on not only a conventional black society, but on female friendship.”

Other books I have recently read and would recommend are Girl, Woman, Other by Bernardine Evaristo, and Afterlife by Julia Alvarez. Perhaps I will have a chance to talk about these more in an upcoming issue. Meanwhile, happy reading and rereading! Stay well and enjoy the late summer days!