The essence of the sacred hunt, passed down to the next generation

The essence of the sacred hunt, passed down to the next generation 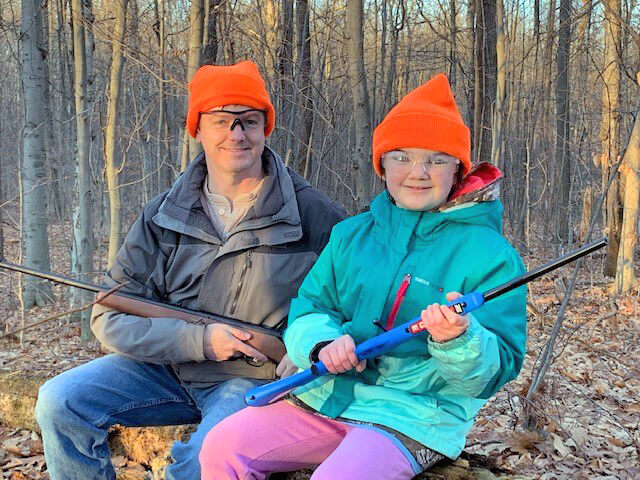 Occasionally, in a hunter’s life there presents an opportunity to share the outdoor knowledge accumulated over the years with a young mind willing to learn about the natural world and our place in it. It is the highest honor for another adult to entrust the young would-be hunter to the safety and experience. It was such a day last fall—closer to winter actually—that I was blessed with the chance to take a friend and his daughter into the squirrel woods for a hunt for the wily bushytail.

Some hunters turn their noses up at the gray squirrel, but it is one of the best targets for teaching a budding hunter about safety, woodsmanship and ethics. I had the privilege of hosting David Blanshine and his daughter, Jenny, on such a hunt. We entered the woods quietly, learning how to step over twigs that could snap, lifting our feet up with each step. Jenny had just passed her Hunter’s Education course and I was curious to see how much the young lady retained from her lessons.

I noticed that the .22 rifle that she carried was the right size for her frame and she was very conscientious about her muzzle. She knew when to carry it pointed down toward the ground, when to carry it to the side and to keep her fingers off the trigger until it was time to shoot. We walked down the trail that cut through the monster oaks and noted the difference between white and red acorns. She listened intently with her Dad by her side, beaming with pride.

We came up to a fallen tree. I wanted to see how she handled the gun in going under it. She stopped in front of the blowdown and opened the chamber to see if the gun was loaded, then asked her father to cross under the tree first while she held the gun with the action opened. Her father crossed under and Jenny asked her Dad, “Are you ready?” He answered yes, and Jenny said, “The gun is on safe and the action is open. Are you ready to take it?” Again, her father said yes. Jenny held the gun with the muzzle pointed downward and slightly to the side, muzzle away from any of us and said, “Dad, have you got it,” checking that he had a firm grip on the rifle. He answered yes and took the gun and under the tree she walked.

As if it were an instant replay in reverse, the entire conversation was patterned, and all safety protocols were followed. I was impressed. We slipped into the oak stand and chose a spot to sit where we could each see a different direction. I would whisper questions to her as she sat between father and me. We talked about survival in the woods, what tools we should carry with us and how to practice patience. I told her that “patience is the way of embracing what you think is boredom and instead looking for all the amazing things going on around you.”

As this young mind was digesting the profound piece of existential wisdom I had imparted, we heard a “chipping” sound on my side of the tree. We all peeled our eyes to see where it was coming from. Before long, a flicker of gray was spotted between the trunk of a maple and a strange Y-shaped branch. The tail was the only thing visible. We watched and determined that we would try to gauge the distance. We figured it out to be about 50 yards away. “Let’s wait and see if he moves to another branch that might offer a clean shot.”

A minute or so later, he scurried down the trunk and strutted out on to a lone branch. Jenny raised her rifle and peered through her iron sights. It was now about 40 yards out. A good shot for someone with a scope and some experience but a stretch for a first timer. This would be the ultimate test. Instead of telling her it was too far for her, I asked, “So you think you can hit it?”

Jenny said, “I don’t know.” I told her that if she thinks she can hit it she can try. The shot was a safe one with no danger of the bullet ricocheting. She raised her gun again and stared the gray squirrel in the eyes. After about 30 seconds she said, “I don’t think I can hit it.” That was the answer I was waiting for. She exhibited all the maturity and wisdom of a seasoned hunter: do not take shots unless you believe without hesitation that you can make it a clean kill. She did not want to cripple the animal. She made the choice that many hunters make every season: “Is this a reasonable clean shot or am I just taking a chance?” We walked out of the woods that day with empty game pockets but the success of knowing that this young lady had learned the most important lesson of all; respect life and only take clean shots. This is the essence of the Sacred Hunt.