Chips and putts
CVU’s men’s golf team traveled to Pinehurst, North Carolina, in early August to compete in the National High School Golf Invitational where they finished 23rd among 27 teams from all over the country. As the reigning champions from Vermont’s top division, the Redhawks sent four players on to three different courses. Alex Leonard led the team with rounds of 80, 75 and 73. Evan Forrest (79, 83, 82); Cam Saia (88, 94, 82); Kyle Rexford (96, 85, 85) followed him. Utah’s team defeated Florida’s by a single stroke to win the tournament. 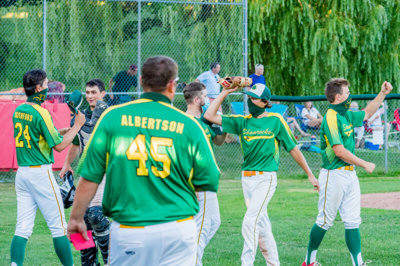 Storm strikes Barre
Although this piece centers around sports and an S.D. Ireland American Legion baseball pitcher, Storm Rushford, it is as much about Storm’s mental outlook and physical capacity to compete at the highest level in this summer’s baseball league. That he did against Barre earlier in August.

Storm has pitched for his high school team at Champlain Valley Union and this summer for S.D. Ireland. Of consequence is the fact that he battles cancer as well as control on his curve balls.

He is under treatment by an oncologist. His chemotherapy goes through September into October when he will be away at college.

But, let’s get back to sports. Storm’s father writes that the day of the Barre game dawned “overall, as an ordinary morning, and no foreboding of the remarkable event that was about to transpire.”

Storm looked at throwing about 45 pitches in the game. He knew that was a reasonable number for him, because in his previous game, he fired a two-hit complete game with 89 pitches.

Ireland managed to score four runs by the third inning of this contest against Post 10. Storm had thrown only 32 pitches, and no Barre player had reached base.

Storm said to his father as the game progressed that if the coaches try to pull him, he will “pull some cards” back because he believes the game could be unique. Therefore, he would work hard to maintain his place on the mound.

His father describes the effect of his chemotherapy, saying that it has numbed the nerves in his lower extremities to the point where he is barely able to feel his feet. Yet, he was able to field and trot with a ball to first base.

By the fifth inning, Storm was still pitching a perfect game, a no-hitter. It continued through the sixth despite a bobbled grounder by Storm’s second baseman—who recovered in time to throw out the runner at first base.

By the time the seventh and final inning rolled around, Storm looked “relaxed and focused on the mound.” The last batter brought everyone on the Ireland side of the field to their feet. Storm launched two strikes—the second a foul ball. His final pitch was a fastball for strike three—a perfect game.

According to Storm’s father, his son was “his usual understated self . . . tickled.”

Ireland went on to win the Summer Baseball League championship on August 2. With the help of strong pitching from Storm and others, the Shamrocks lost only a single game all season.

Information for this column came from Storm’s father, Matt Rushford.