I write to you sweaty, sequestered and a bit jetlagged after flying back from a wonderful two-week trip to Charlotte, seeing family and friends. I rarely get to return home, and when I do, there’s never enough time in the day for my visit to feel complete. I see visiting as a balancing act: seeing old pals, spending time with parents, and rolling around alone in the nostalgic stink of my wonder years. Normally, I can effectively only get around to satisfying two of the three categories, but this time I had enough slack in my rope to do it all. Long story short: I miss Vermont, I miss my friends, and I miss all of you. 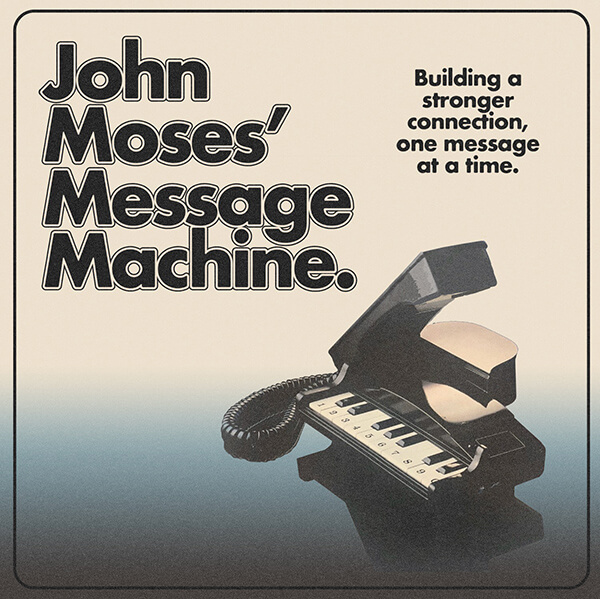 The act of missing people and places and friends and things is one of the many morose through lines of 2020, although the sentiment has spooled into my weird world of radio to create something good…or, at least, something I’m happy with. Since March, everything I usually do on-air has been done entirely from home. I’ve hosted and guest-hosted shows without pants on from the safety of my living room—sometimes this is ideal, but most of the time I wish I were actually in the on-air booth, connecting with listeners and musicians. Between longing for connection and the stale feeling of trying my best to sound like I’m in a professional radio station (all while my cat is screaming at me for an unknown reason), I felt the need to cook up something new. And thus, an idea was born.

Enter John Moses’ Message Machine: my latest co-creation with my wife, Alison, for the LA-based radio station KCRW, highlighting endearing characters and music curation. Every episode, I choose a group of guests to pick a song based on a creative prompt. Each participant then leaves me a message about their song of choice. The final product sounds like listening to a number of voicemails through an answering machine, giving context to the music played throughout. It’s a strange mix of music discovery and personal connection. I’d love to walk you through what we’ve been working on.

Episode one is all about music for film and TV, and much of putting it together involved contacting a handful of the most interesting people we know. We called up music supervisors and curators, musicians, record store owners, writers and even a few fellow KCRW DJs to participate. Luckily, most everyone was on board with the idea and willing to leave a voicemail. Magazine publisher Kristina Benson and filmmaker Shatara Ford both left incredible messages that I feel completely encapsulated how we wanted the show to sound. Kristina talks about one of the on-camera songs from the 1982 film Ladies and Gentlemen, The Fabulous Stains, while Shatara glows over The Rolling Stones’ “Thru and Thru,” which dramatically ends season two of “The Sopranos.” In total, we collected a dozen messages that we had to sort, edit, and re-arrange.

Episode two, in which we asked guests to submit music in a non-English language, mirrors the appeal of the series debut while sounding more cohesive. We felt like there was a concrete formula to follow and our guests had episode one to reference. Off the bat, there are some fantastic selections: Taiwanese music expert Angela Lin kicks the show off with an amazing epic from rocker Wu Bai, titled “Cool It, Kid!,” followed by a few long-lost singles from Middle Eastern artists: «Dar Enteha” by Kouroush Yaghmaei of Iran, and Palestine’s “Tareeq” by Al-Bara’em (selected by the artist’s son, music journalist Sama’an Ashrawi, who discovered his father’s music 50 years after it was recorded).

The next episode themes were more ambitious: “Songs You Love by a Band You Don’t” and “Music Featuring Homemade Instruments and Sound Effects” stumped many of our prospective guests. In their defense, those are tough prompts. However, through the struggles of our niche subject matter came some unique song picks. Publicist and label owner Nicole McKenzie completely painted a song by UK band UB40 in a different light by presenting their 1985 single “Don’t Break My Heart,” which gave me a new appreciation for their work and a willingness to give them a second chance. In episode four, composers Bradford Reed and Michael Andrews opened my ears to the inventive and challenging world of avant-garde musician Harry Partch, while producer and sound designer of the band clipping., Jonathan Snipes, connects the dots between American roots music and hip hop through his adoration of “Married to the Game” by South Carolina rapper Alpoko Don.

After focusing on hyper-specific subjects, we wanted to broaden the themes of the next episodes, “The Most Beautiful Song” and “A Song You Wish You Wrote.” The episode on most beautiful songs features music from every stylistic corner, ranging from John Prine to Madonna, all the way to T-Pain. Each guest has their own definition of beauty: some more literal, with piano teacher Julie Simon referencing the exact tempo of Gato Barbieri’s “Europa,” while others were more like vocalist Gavin Turek, who loved Roberta Flack’s classic “Feel Like Makin’ Love.” The spirit and variety of this episode carries over to the next in “A Song You Wish You Wrote”: Charlotte’s Francesca Blanchard and vocal duo Lucius lean on the lyrics and crisp production of “White Flag” by Dido and “I Will Always Love You” by Dolly Parton. Indie artist Mirror Gazer and music-making man Joe McKee (whom I’ve glowed about previously) provide a colorful streak across the episode, the former fawning over the tightness of King Crimson’s chaotic “21st Century Schizoid Man” and the latter wishing he could conjure from his creative subconscious the comical sexual innuendo of Mighty Panther’s “The Big Bamboo.”

I’m thrilled about the possibilities of having a new medium through which to communicate with artists and listeners. The pandemic has required people to reassess their routines and re-configure methods that previously felt tried, true and comfortable. In the beginning, it seemed unnatural, forced and rushed, although now that we’ve had some time to settle, I’m finding comfort in the idea of modifying my habits. It seems like others are as well—and that’s awfully exciting.
You can check out some of the song choices I reference in the Tunes to Tune Into Spotify playlist, available on the Charlotte News website for those of you reading in print. You can find all episodes of Message Machine on KCRW.com. Do you have any ideas for a theme? A favorite song? Let me know—you might just end up on my message machine.

To listen to the music

John Moses is a former Charlotter and a musical host of The Lab, a radio show on KCRW in Los Angeles (an NPR affiliate).  You can reach John via email.