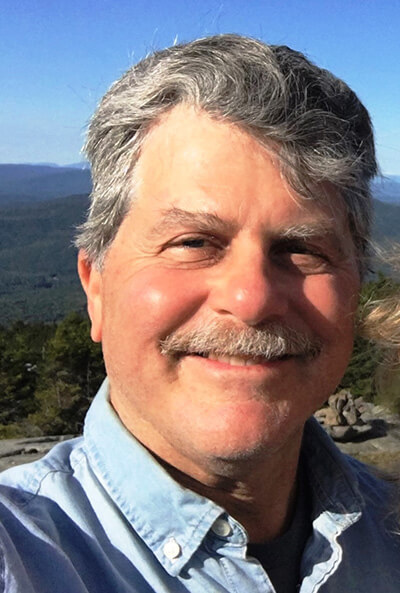 Larry Lewack has moved to the head of the table. This June, he was hired to be Charlotte’s Town Planner with the role of facilitating the work of the Charlotte Planning Commission.

“Planning and zoning has surprisingly emerged as a third career for me,” Lewack said. “My first career was human services as a direct provider and then as a program director in the nonprofit sector.” From 1988 to 1999, he served as a volunteer commissioner on the Burlington and Winooski Planning Commissions, and in 2018, Lewack applied for the position of Planning and Zoning Administrator in Bolton.

“I was very surprised when they called me for an interview,” he said, “and even more when I got the job and found that I was good at it.” The Bolton job was part time, so Lewack jumped at the opportunity to apply for the full-time position in Charlotte.

Lewack was happy to discover that the members of the Charlotte Planning Commission share his values. “The town has high standards on how projects get done in ways to preserve areas of high public value,” he said. “That includes traditional agricultural uses and protecting the shoreline of Lake Champlain and streams and rivers. When I get home I feel as though I’ve done important work rather than just allow some developer to carve up farmland with cookie cutter houses.”

Although Lewack’s career arc may not seem like a direct path to Town Planner, he believes he has gained a lot from that early work, which included stints at the Vermont Department of Aging and Independent Living, the Vermont Energy Education Program, VSA Vermont, the Brain Injury Association of Vermont, and the Vermont chapter of the National Alliance on Mental Illness.

When he worked in the disability field, one of his jobs was checking to see if polling places complied with the Americans with Disabilities Act. “It was interesting to do the survey and present the results in a way that could be digested by the towns while also doing the right thing for people with disabilities,” he said. “We needed to strike a balance.”

Lewack believes his time volunteering on other planning commissions is beneficial for his new role. “I remember what I expected and wanted from staff,” he said. “I remember how important it was to have a professional staff member. If you’re only interacting with other professionals, it’s easy to forget that you’re dependent on volunteers.” Lewack noted that volunteers in both the nonprofit and municipal sectors can be very passionate about what they do, so it’s helpful that he understands what brings people to the table.

The Planning Commission is currently focusing on what Lewack describes as “small technical fixes” for the Town Plan, but a major point of contention is the commercial development slated for the Charlotte Crossings property. In November, citizens will have the opportunity to weigh in on proposed changes to the regulations regarding parking that affect that development and other new businesses in town. “It’s been an interesting process and I arrived in the middle of it,” Lewack said. “There are strong feelings on both sides, and part of my job is to make sure proceedings are respectful and we follow the letter of the law.”

Lewack’s spare time is as activity filled as his day job. He plays the agogô bell, triangle and cowbell for the all-percussion Afro-Brazilian Sambatucada band, a two-decade-old institution that he joined 15 years ago. He regrets that this year all their performances have been cancelled because of the coronavirus. He and his wife, Peggy MacDonald, have been married for almost four decades, and she recently retired after 33 years of teaching special education at CVU. They have two adult children. Lewack enjoys cycling, sailing, and downhill and cross-country skiing. For the last 38 years he has swam a half mile three times a week at the YMCA, a streak that was broken this spring by the pandemic.

Lewack believes many people see the job of Town Planner as heavily bureaucratic and technical, but he says that is not the case. “When I’m really doing my job well, it’s about helping people and making the process super accessible,” he said. “Not everyone has access to engineers and landscape architects, and we want to help applicants bring projects forward so they can be quickly reviewed and decided. We want the process to be something that people can navigate and one that isn’t overwhelming and bureaucratic.”