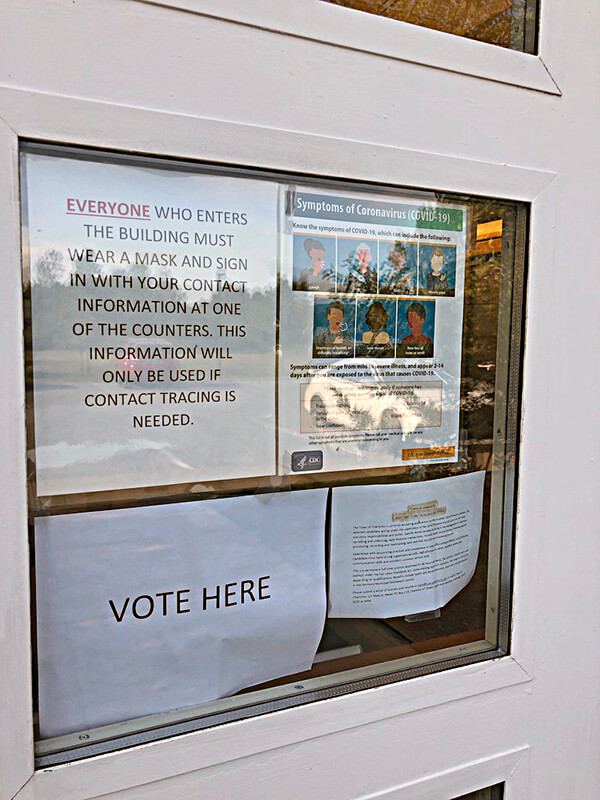 Voting usually takes place at the school, but school district rules limiting facilities access because of the coronavirus meant that this year’s primary election took place at the town hall.  Photo by Chea Waters Evans.

With the scent of hand sanitizer pungent in the air and voters politely nodding and maintaining distance in close quarters, voting in Charlotte for the 2020 primaries was certainly out of the ordinary. The Charlotte Central School multi-purpose room, the polling location in town for many years, was closed to voters as the school district prepares to teach students in coronavirus conditions. Ballots were cast at Town Hall this year instead.

Regardless of which party they registered in, Vermonters can vote in the primary of whichever party they’d like, as long as they stick with one. Voters on Tuesday were handed three pages—Democratic Party, Republican Party, and Progressive Party—and when they were finished voting, they handed the two blank forms back to Town Clerk/Treasurer Mary Mead and put the completed ballot right into the box.

Charlotters voted overwhelmingly as Democrats in this year’s primary: out of a total 1,498 voters, 1,126 voted in the Democratic primary, 309 in the Republican primary, and 3 in the Progressive primary.

Out of the total number of ballots submitted, 1, 182 were turned in by absentee ballot.

Current governor Phil Scott won the Republican primary in Charlotte with 254 votes; second place was John Klar with 49. On the Democratic side, Hinesburg farmer and current lieutenant governor David Zuckerman took 561 votes; Rebecca Holcombe was the next highest with 357 votes. Republican votes for lietenant governor went to Scott Milne with 162 and the next highest 69 votes. Democratic voters chose Tim Ashe with 546 votes; the next highest was Molly Gray with 399.

For state senator, the top six vote recipients on the Democrat side were Ginny Lyons with 769, Kesha Ram with 718, Michael Sirotkin with 614, Phil Baruth with 586, Christopher Pearson with 399 and Thomas Chittenden with 392. The Republican state senator candidates were Tom Chastenay with 165 and Ericka Redic with 137.

Looking ahead to November, with lots of national chatter about absentee ballots, mail-in voting, and post office woes, the Town, with Mead at the helm, is prepared for higher-than-usual participation and increased interest in voting by mail, in part because of the coronavirus pandemic.
Mead said that though she’s not yet sure of the exact date when November ballots will be ready, she believes they will be available mid-September, “and they will be mailed from the Sec. of State’s Office to all active voters on our checklist.”
She also reminds voters, “As always, we need the ballots returned to us by the close of polls, which can be by mail or drop off in person, whatever is easier. Don’t be mailing your ballot the day before the election.” She did note, “I think people will have plenty of time to return the ballots to us in a ‘TIMELY’ fashion.”