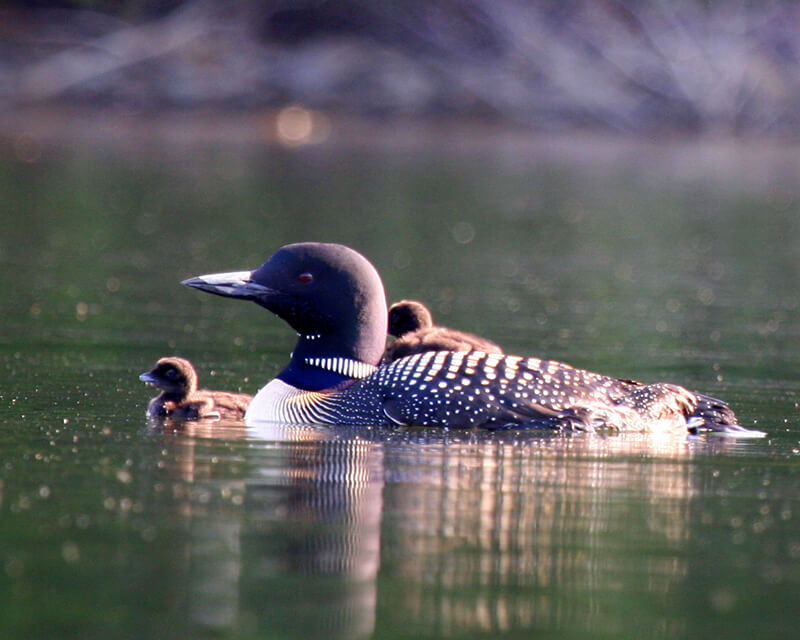 Loons are flourishing in Vermont this year. Photo by Janet Steward, courtesy Vermont Center on Ecostudies.

There’s no space right now for more grim news. I will leave it to others to write about cyanobacteria blooms in Charlotte and elsewhere, drought and its sequalae, climate change, and species loss. For this moment, through rose-colored glasses, I’m reporting good news in the outdoors.

Loons
In July, 200 volunteers visited 160 bodies of water for the annual Vermont loon count. After visiting 110 Vermont lakes and ponds, loon watchers confirmed 94 nests. This season saw the earliest nest ever, in early May, and the latest in mid-July. A pair on Kent Pond hatched its chick on June 4, an early record, while on Bald Hill Pond a pair did not start nesting until between July 11 and 13, the late record.

Through the early 1990s there were as few as a dozen breeding pairs in the state. At the turn of the century there were still fewer than 50 nesting pairs. The year 2000 was the first to witness more than 50 hatched chicks. Final numbers have not been tabulated for this season, but 2019 saw 115 chicks hatched with 87 surviving through August. The 2019 tally of adult loons was 339 on 86 bodies of water. This season, Eric Hanson of the Vermont Loon Conservation Project believes that Green River Reservoir and Somerset Reservoir each are hosting a record of four breeding pairs. All in all, good news. 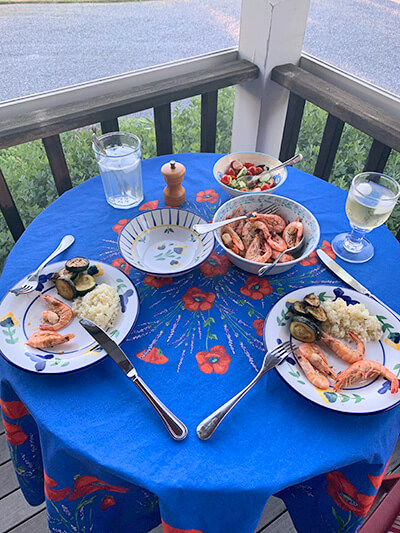 This dinner was sourced from within just a few miles from home in Charlotte. Photo by Elizabeth Bassett

Landlocked shrimp
Who knew that one could raise shrimp in Charlotte? Sweet Sound at Nordic Farm is John Brawley’s land-based aquaculture farm, currently producing between 50 and 100 pounds of Pacific Whiteleg shrimp each week.

“Before the virus I was selling mostly to restaurants,” Brawley says. “We had also planned to sell at the weekly Shelburne Farms market.” All of that has changed in the era of COVID-19, he said. “Restaurants are slowly re-opening and we are selling retail from the farm.”

Brawley’s shrimp grow to market size in about three months, considerably less time than the year or more for farmed trout and catfish and closer to two years for oysters, which Brawley farmed in Duxbury, Massachusetts, before moving to Vermont.

Shrimp arrive from a Florida hatchery the size of an eyelash. They spend their first month in nursery pools until they reach about one inch in length. Brawley then transfers them to larger pools of recirculating seawater where they spend two to three months sizing up to 20 to 35 per pound. Shrimp are fed four times each day—no hormones or antibiotics. Brawley includes probiotics, locally grown organic grains fermented with probiotic bacteria.

Shrimp, like lobsters, are carnivorous and cannibalistic, consuming their own shells as they molt and occasionally their neighbors’. About 80 percent survive to harvest. They are sold with head and shells intact.

A recent dinner on our porch included Vermont Shrimp, Broadbook Farm rice from Ferrisburgh, and our garden vegetables. Can’t do much better than that!

New trail on Mt. Philo
Perhaps you have noticed trail work at our local state park. Timber & Stone, a Central Vermont-based trail design and construction firm, is running the project. Principal trail designer and builder Josh Ryan is a veteran of Vermont Youth Conservation Corps. Since its founding in 2004, Timber & Stone has worked on trails throughout the Northeast, including the boardwalk at Raven Ridge in Charlotte, built from reclaimed cedars. The new trail on the upper part of Mt. Philo will protect against erosion and minimize wear on the underlying bedrock, soil and flora.

Bird-friendly maple project
A recent partnership between Audubon Vermont, the Vermont Department of Forests, Parks, and Recreation, and the Vermont Maple Sugar Makers has a goal of managing sugarbushes for three long-term goals: maximizing maple sugar production, managing diverse forests for healthier trees, and providing habitat for birds to forage, find cover, and raise their young. As gardeners know, there are risks in monocultures as pests and diseases can ravage a single crop.

Audubon Vermont and the Vermont Center on Ecostudies will study outcomes for sugarbushes that are biologically and structurally diverse. The hope is that these sugarbushes will have better long-term sap production, fewer forest health problems, and be better able to adapt to the stresses of climate change. Look for the label that indicates that syrup was produced in a bird-friendly forest habitat.

Peregrine falcons
If you’ve been waiting to hike near cliffs with nesting peregrines, the trails are open. Vermont’s falcons have fledged, and biologists and volunteers believe that 2020 is a successful year. Peregrine pairs nest on more than 50 cliffs across the state. Peregrine falcons were removed from Vermont’s threatened and endangered species list in 2005.