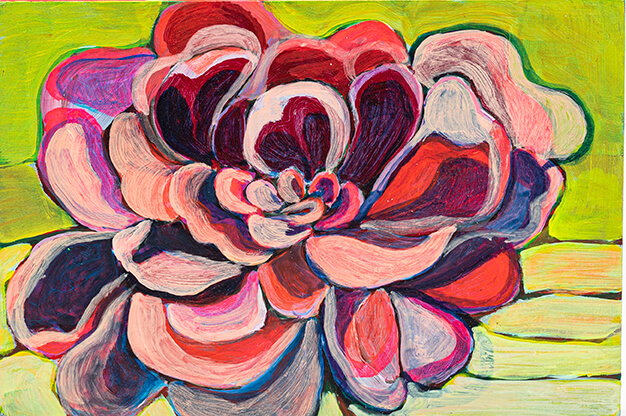 Wylie Garcia is spending a lot more time at home in Charlotte these days. With the onset of COVID-19, she gave up her Burlington studio and is now making art from her bedroom, which gives her the opportunity to look at and revisit her creations throughout the day.

A native of Texas, Garcia moved to Vermont in 2003 and has lived in Charlotte for three and a half years. She is represented by Soapbox Arts in Burlington and Schoolhouse Gallery in Provincetown, MA. Garcia’s artwork runs the gamut from drawing and painting to mixed media, textiles, sound and performance. She describes her work as investigating “themes of identity and place through process and material-oriented projects.”

“There is a certain concept that I’ve worked with from the very beginning,” Garcia said. That idea was originally that “human beings aren’t placed, they bring place into being. It was a lot about how place-making is existing within a space and identifying objects and making them your own.” For Garcia, the idea behind a piece of art is more important than the medium used for the piece, which has allowed her to explore a wide variety of art forms over the years.

The mother of an 11-year-old and a five-year-old, Garcia also uses her art to explore “issues of gender, devotion and emotional spaces.” One project that dealt with all those issues was called “Dress that Makes the Woman.” “I grew up in Houston and there are specific cultural norms about gender and identity,” Garcia said. “I was making dresses which I referred to as wearable sculpture and decided to do a project where I took a garment from my closet and changed it every day. It was part performance art and part diary.” Every month for a year, Garcia chose a different dress and altered it on a daily basis. “It was also exploring the notion of how each dress adopted its own feminine persona,” she said. “It gave me permission to literally try on the different personas and explore who I wanted to be.”

Garcia’s original art medium was alternate process photography, which she studied at the University of Chicago. From there, she moved to textiles and then painting and drawing. A decade ago, she became interested in performance art, starting with “Dress that Makes the Woman.”

“I’m pretty introverted and quiet,” she said, “so it was an experiment about how much to reveal.” Eventually, Garcia shifted her interest to film and sound, culminating in a California project where she was commissioned to do three pieces about hysterical women, which involved re-filming video until the pictures and sound became fractured.

In the summer of 2013, Garcia created a 10-week performance piece called “Calling Hours” in her living room. She gave chamomile tea and ginger snap cookies to friends and strangers, serving as a hostess/moderator when conversation lagged. “The point of the project was to hold space for people when they showed up,” she said. “The performance became a kind of a literal metaphor too.”

In her spare time, Garcia tends a rose garden and a vegetable garden. Although she hasn’t had the opportunity recently, she also really enjoys bowling. However, one of her favorite pastimes is connecting other artists to grants or residencies. Garcia has received a grant from the Pollock-Krasner Foundation, the Barbara Smail Fellowship and Award from Burlington City Arts, three Creation Grants from the Vermont Arts Council, and a St. Botolph Foundation Fellowship, and she wants to share her knowledge about these kinds of opportunities with others. “It’s something I love to do,” she said. “I like to keep tabs on what’s out there and people who could benefit.”

“My work is like a container,” Garcia said “holding space to help me process the day.” She noted that these days she is shifting more to painting because she would like a little more lightness in her life. “I look at my paintings,” she said “and I can tell you what was happening as each phase of the painting was developing.”

The amount of time Garcia spends on her art varies greatly. She spent ten minutes a day on “Dress that Makes the Woman,” but over half an hour daily on an ink drawing project that also lasted a year. “I look at art like going to church,” she said. “Art is in the process. The object is itself and people can enjoy it, but the art for me is in the making.”