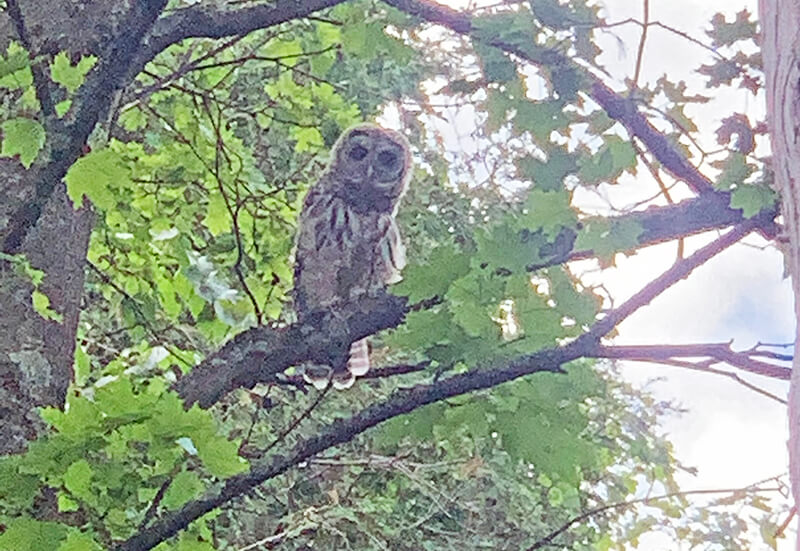 This owl was hanging around Charlotte last week mid-day. Photo by Rich Ahrens.

Several Charlotte residents have mentioned to The Charlotte News that they have been noticing barred owls more than usual this year. Bird Project Leader for Vermont Fish and Wildlife Doug Morin shared some of his knowledge as to why this could be. “The barred owl is our most common and widespread owl. It’s a forest bird, primarily. Populations appear to be stable or increasing in Vermont and across its range. I’ve seen a few reports recently of folks seeing birds. I would suspect this every year around this time, as juvenile birds leave the nest and begin exploring the world—they can be relatively visible compared to wary adults.”

While it’s unclear if an increase in sightings is due to there actually being more barred owls in the area, the population is healthy in Vermont, and environmental conditions have been ideal for a healthy and successful breeding season.

“Last year was a good ‘mast’ year for acorn and beechnut production, so it’s possible acorns allowed small mammal populations to do well over winter, which have supported more owls this spring/summer. That’s speculation, but the cycles of mast production, herbivore population increase, and predator population increase are routine,” Morin said. The barred owl has a diverse diet mostly made up of small mammals, birds, reptiles, amphibians and fish. The increase in food supply for their prey would eliminate some food competition amongst hatchlings and juveniles that are less skilled in hunting than the mature owls.

“It is currently the tail end of the barred owl breeding season and the time during which babies are leaving the nest for the first time and branching out on their own, if you’ll pardon the pun!” said Anna Morris, a master of raptor biology at the Vermont Institute of Natural Science. “These young fledglings are the same size as their parents and roughly the same color pattern as well, so it is hard to tell them from adults. It may be that you have several nests that have fledged out in your area at approximately the same time. They may be more vocal because they are begging for food from their parents, or adults are having renewed territorial disputes. I also like to remind people—owls do exist in the daytime! It’s not all that unusual to see an owl during the day, they just tend to be more active at dawn and dusk.”

Barred owls prefer thick tree groves and low wet forests, of which Charlotte has plenty. For the best chances of coming across one of these beautiful creatures spend some time around dawn and dusk quietly observing forests and fields, as well as other places that smaller creatures can be found.

Sightings in broad daylight are not that rare. “This is not an unusual occurrence. Barred owls tend to be more crepuscular in their behavior than some of our other owls, which increases one’s odds of seeing them,” said Craig Newman of Raptors in VT. “They also are tending to youngsters who are fully flighted and starting to become more independent but still require supervision from adults. The third contributing factor is there are a lot of people spending more time outside and suddenly becoming aware that there are other living critters out there going about their lives unaffected by COVID-19. Last season was also not very severe weather wise, so presumably barred owl production was high, resulting in more individual birds for us to see.”

Hotter weather will generally push barred owls higher into the foliage as they are able to get cooler air, and be sure to note hollows in trees as they are cavity nesters. Also listen for the “Who-cooks-for-you?” sounding call, as they are more commonly heard than seen.