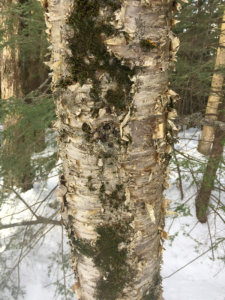 The yellow birch is a generalist where it grows, but a specialist when it comes to arthropods. Courtesy photo

Yellow birch (Betula alleghaniensis) is a striking tree: golden, metallic bark shines among the grays and browns of other trees. The cousin of our most-identifiable tree, the white or “paper” birch (Betula papyrifera), yellow birch has many of the same attributes: bark with little horizontal dashes, peeling horizontally.

Unlike white birch, whose bark peels in broad, flat sheets, the bark of yellow birch peels in thin strips and lacks most of white birch bark’s useful attributes; not much good for writing on, making a canoe out of, or starting a fire. Yellow birch twigs are identifiable via the scratch-and-sniff test: scratch the bark and you will detect the chemical compound methyl salicylate, oil of wintergreen. That minty smell is a dead giveaway, although the less-common black or “sweet” birch (Betula lenta), distinguishable from white or yellow birch by its steely gray-black bark, also carries it.

In the woods, yellow birch is flexible, a generalist. It grows at high elevations, in swamps and seemingly everywhere in between. It is a fixture in eastern old forests, capable of living for hundreds of years and becoming massive. It can be found from Newfoundland to Georgia, although it is most abundant in the northern part of its range.

The seeds of yellow birch are borne on the tree in clusters that look like cones. Individual seeds are shaped like a bird’s foot, about ¼ inch in length, dropping in winter and dispersed by wind over the surface of snow. Like other birches and aspens/poplars, yellow birches produce lots of seeds but don’t put much energy into them—unlike the energy-packed nest egg (the acorn) that oak seedlings are equipped with, yellow birch seeds have to make do on their own, mostly by finding a site that is just right to grow.

Yellow birch seeds and seedlings are most successful in a couple specific circumstances. The first is when they land on disturbed soils. Their small seeds have trouble putting down roots through the “duff,” the layer of decomposing leaves and wood at the top of the soil. They need something to scrape this layer back and expose the mineral soil beneath, which is done as trees fall over, when forest fires burn off the duff, or when areas are logged, particularly in the summertime. Scarification, the intentional disturbance of the duff, is sometimes done intentionally during forest management to encourage the regeneration of species like yellow birch, white pine and eastern hemlock. While too much soil disturbance during forest management can cause soil compaction, erosion and root damage, some light scarification can increase the diversity of the trees in your forest.

Another opportunity for yellow birch seeds is when they land on rotting wood. As wood decays it provides a moist, nutrient-rich seedbed for young trees—what we call a nurse log. Yellow birch seeds often germinate on a rotting log or stump and grow roots around it, down into the soil. The log rots away but the roots remain, creating trees that look like they have legs.

Because of their association with rotting wood and disturbed soil, the presence of yellow birches of about the same size can indicate a past disturbance (like logging, or a wind or ice storm) in your woods. If you can tell how old they are, you can tell about how long ago this disturbance occurred.

One special ecosystem function that yellow birch serves is supporting high-density arthropods (bugs) compared to Vermont’s other tree species. Arthropods, in addition to performing their own crucial ecosystem roles, are also the base of the forest’s foot web, feeding insectivores like many of Vermont’s bird species. For this reason, yellow birch is a good species to encourage in your forest when managing for bird habitat.

Yellow birch is somewhat, but not very, tolerant of shade, so if you want to manage for yellow birch in your forest, create gaps or groups (small openings) by cutting a patch of trees at least 1/10 acre in size. Leave lots of wood on the forest floor and leave branches and treetops messy, to help shield your young trees from deer browse and provide future nurse logs. While some sites are simply too wet to harvest in the summer without causing ruts and too much soil disturbance, on dry sites don’t be afraid to work when soils are dry in the summer and to scuff up the soil.