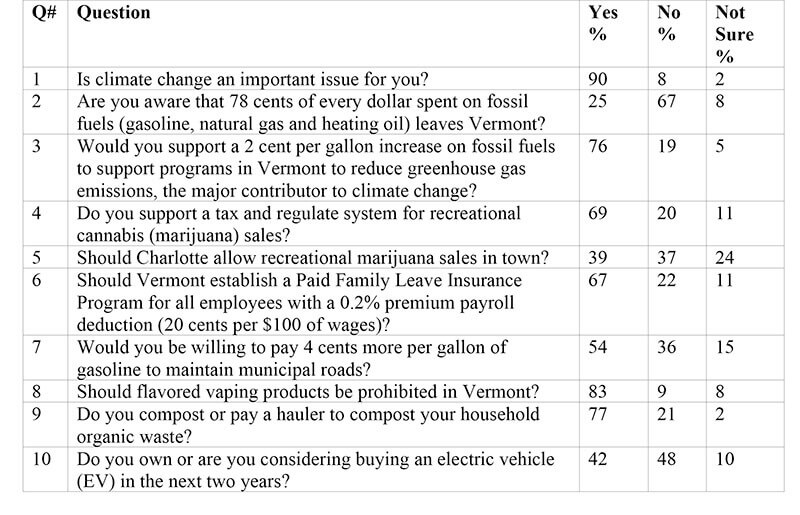 The results of the Legislative Survey, which 140 Charlotters filled out this year, within a week or two of the town meeting.

It’s been more than a month since Town Meeting, and oh, what a month! In past years I published the results of the Legislative Survey, which 140 Charlotters filled out this year, within a week or two of the meeting. This year we have all been preoccupied with something else called COVID-19. Unfortunately, that little problem has sucked all the oxygen out of the legislative chamber and reset our priorities for the rest of the session—and rightfully so. Nevertheless, I appreciate everyone who took the time to fill out the survey.

Fossil fuel consumption
While we are now focused on one existential crisis, the novel coronavirus pandemic, which is an immediate threat, we mustn’t forget about the other existential crisis of climate change. Ironically, the former crisis is having a mitigating effect on the latter. The abrupt and broad economic shutdown is resulting in a significant reduction in transportation fossil fuel consumption, which had been the largest contributor to greenhouse gas emissions in Vermont and the United States. I think we could all agree that this is not the way we would have liked the reduction to occur. (Is Mother Nature telling us something?)

A preferable approach would have been a controlled reduction by making a conscious choice to wean ourselves off fossil fuels by transitioning to cleaner electric energy with incentives to do so. That, however, would require what I consider to be a small sacrifice in the cost of transportation and heating fuels to generate revenues for weatherizing homes, electrifying transportation and actually saving consumers money in the long run.

Climate change
Three of the questions in the survey tried to assess the support for that approach in our community. While 90 percent of respondents consider climate change to be an important problem, only 76 percent seemed willing to spend an extra 2 cents per gallon to generate revenues that could be reinvested in fossil fuel reduction. While 78 cents of every dollar spent on fossil fuels, or $1.95 of every gallon, leaves the state, the two cents per gallon would generate $15M that would be spent in state.

Marijuana sales
There’s pretty strong support for a tax-and-regulate system for recreational marijuana sales, but Charlotters are pretty evenly divided (39 percent Yes, 37 percent No) on whether we should allow sales in Charlotte. A significant percentage (24 percent) were undecided.

Paid family leave
Establishing a Paid Family Leave Insurance Program for employees was favored by a 3 to 1 margin, with 11 percent not sure. Ironically, the COVID-19 relief package passed by Congress contains funding for paid family leave during the emergency. This could be a catalyst for continuation of the program beyond the emergency.

Gasoline tax
Because the efficiency of the country’s vehicle fleet has been increasing as a result of the EPA vehicle efficiency standards, which the current EPA just set aside, the state Transportation Fund has experienced a decline in revenues. There is less money each year to support our roads and bridges, including municipal infrastructure. Increasing the gas tax, a move supported by the Vermont League of Cities and Towns, would help fund municipal roads. Slightly more than half of respondents are willing to pay four cents more per gallon for this.

I included the last two questions regarding composting and appeal of electric vehicles to assess respondents’ attitudes on those policies.

As your representative in Montpelier, I appreciate your input on these and other issues. Your comments help me look at issues from several perspectives, and that is valuable to me. You can always contact me by phone at 802-233-5238 or by email . This article and others I’ve written can be found at my website.

You can make a difference!