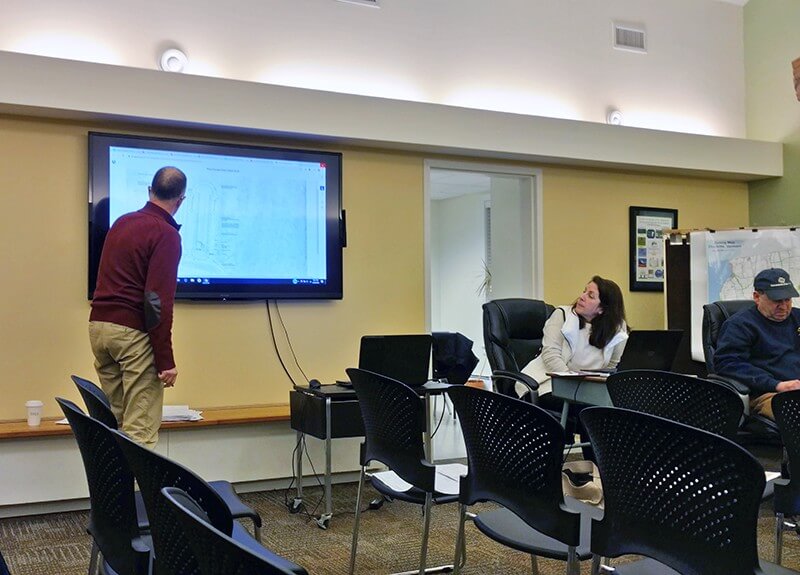 The Commission heard from Roy Marble regarding a proposed subdivision on Spear Street. Marble proposed subdividing the 31.34 acre property at 3453 Spear Street from two lots into five lots. The property had been subdivided once, so the commission voted, 5-0 to classify the application as a four lot major subdivision PRD and close sketch plan review on PC-20-01-SK Marble-Winn-Clark. Planning Commission members David Kenyon and Shawn Coyle were absent.

Expanded parking at Mt. Philo
The Commission heard from Rick Heddy regarding the proposed parking lot at Mt. Philo State Park. Heddy was filling in for applicant Dennis Lincoln from the VT State Department of Forests, Parks and Recreation. In the presentation, Heddy explained the design of the new entrance and parking lot.

The proposed entrance would be moved 300 feet north from the original entrance and feature a long gravel roadway to the contact station “to allow for stacking vehicles — it really is a safety issue.”  According to the application, the parking lot would expand from 60 spaces to approximately 120-130 spaces, with 6 ADA spaces and a composting toilet in the middle.

Chair Peter Joslin asked, “When it’s really busy in the summer months, cars are parked down State Park Road for quite a ways. If both lots are full, is there a plan for excess parking?” Heddy responded that the current plan should accommodate parking on busier days, but they plan on closing the lots and putting out a sign saying the parking lot is full. “We had it in place this year, but we didn’t use it,” Heddy said.

Planning Commission member Gerald Bouchard asked, “Mt. Philo made the news about people breaking into cars. Are you running any power lines where you can put up cameras?” Heddy responded, “No. The contact station is powered by solar. We talked about cameras in the past…There’s no one there to monitor or review. We determined we weren’t going to do that.” Bouchard said, “With the problems we’ve been hearing about the parking lot of this size and we are going to double that?” Heddy responded, “Currently we only have a sign saying not to leave valuables in your vehicle.”

The commission members also asked questions about using landscaping screening, the type of permeable materials proposed to be used for the parking spaces, and the storm water retention pond/rain garden. After a bit more discussion, they voted to close sketch plan review, 5-0.

Updates to land use regulations
The Planning Commission reviewed the Town Planner’s draft edits to the town land use regulations, but specifically focused on working through a spreadsheet of proposed changes. The changes varied from updated definitions in the glossary and incorporating terms referenced in the town plan to a brief discussion on the proposed standards for lot sizes and setbacks in the East Charlotte Village Commercial District.

During the discussion, resident David Adsit expressed his concerns about the proposed changes in the East Charlotte village. “I am not sure if this is the time to bring this up, but I have concerns about expanding the commercial district and one-acre zoning. This will unalterably change the character of the village,” said Adsit. He spoke of other residents’ concerns and rumors of development plans: “People feel like they are losing control [of the East Village], it’s spiraling out. … No one I’ve talked to is against growth, just the pace of growth.”

Joslin responded to Adsit’s concerns, outlining the process the Planning Commission has undertaken “This is at least a year and half working on the East Charlotte Village, with various numbers of folks showing up.” He continued, “We always encourage people to show up…people from the East Village and town in general. There is a lot of time to voice opinions one way or another.” Joslin noted that there will be Selectboard hearings and an eventual town vote on the proposed changes to the land use regulations. Resident Bill Stuono added, “The fact that this has been dragged on for so long has kept people from coming. We are worn out.”

Other business
As an adjustment to the agenda the Planning Commission briefly discussed the petition submitted by the owners of Charlotte Crossings to the town of Charlotte regarding parking lot design in the town’s land use regulations. The petition received 178 signatures, validated earlier that day by the Town Clerk. Joslin read the statute governing petitions and informed the commission they would schedule a hearing, draft a formal response with recommendations, and submit it to the Selectboard. The commission also approved a six month extension of the sketch plan review letter for PC-19-76-SK Root Seven Holdings, LLC for the property located at 3171 Ethan Allen Highway.

The next scheduled Planning Commission meeting will be held on March 5 at 7:00 p.m.