Ski-cross teenager competes at the next level

Ski-cross teenager competes at the next level 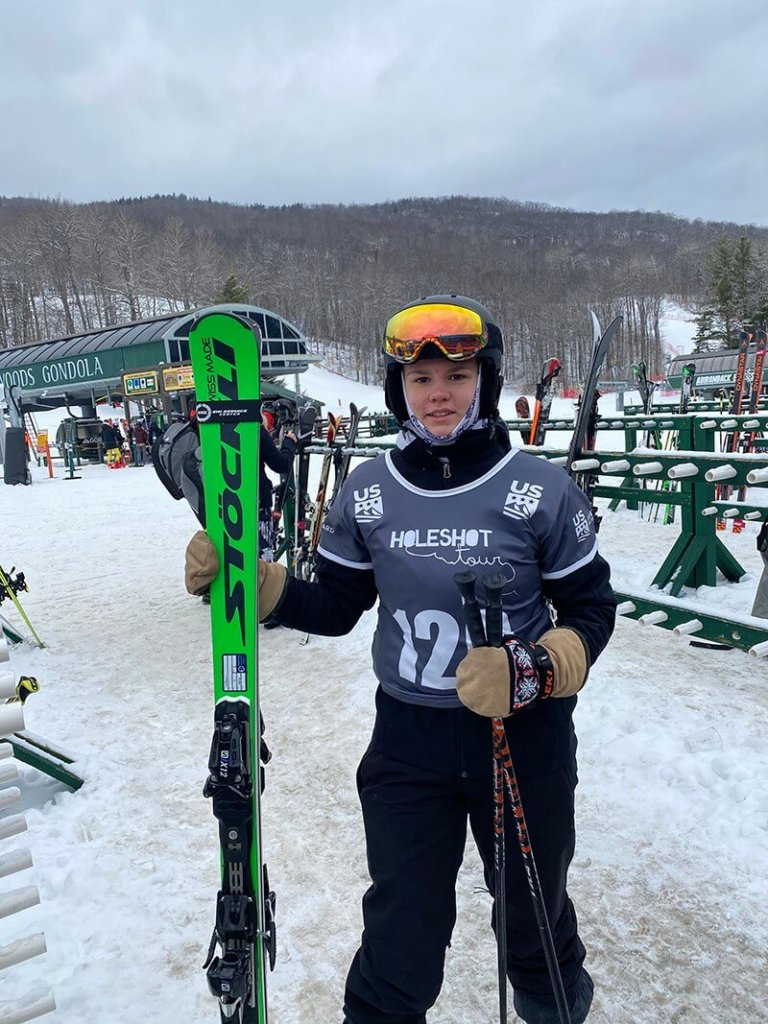 Muriel Spell is competing this week in the Holeshot Tour at Gore mountain. The invite-only ski-cross race series is a stepping-stone to higher competition levels. Photo courtesy Jill Spell.

When Muriel Spell was in middle school, she made up a sport in her head: part downhill slalom ski racing, part 100-meter dash. Imagine her delight when she found out it actually existed in the form of ski-cross racing—and then imagine, six years later, Muriel competing in the United States of America Snowboard and Freeski Association’s national skier cross competition…and coming in second. She is skiing this week in the Holeshot skier-cross race series at Gore Mountain.

Muriel competes in both freestyle ski and ski-cross races. The freestyle ski races send athletes off of 30-40 foot jumps; ski-cross involves four skiers taking off on the same track at the same time. Muriel’s mom, Jill Spell, describes it this way: “I find it very similar to NASCAR, or BMX motorbiking; it’s exactly that but downhill skiing and with people instead of motorbikes.” The sport relies more on a skier’s ability to navigate the course and use technical skills more than a traditional ski race, which involves complex equipment and specific race gear and competition suits.

An avid skier since she was very young, Muriel said she was in at a friend’s house when she was 13, and saw her first ski-cross race on a little television in their kitchen. She said she had often wished there was a “more fun” version of traditional ski racing, where the competition involved going head-to-head with friends, and there it was, right in front of her.

“I looked at the TV and I said, ‘Who the heck read my mind,’” she said, and found a race nearby and signed up. Since then, in the three years she’s been competing, she went from a curious and excited newbie to second place her age group last year at the USASA Nationals.

The Charlotte 16-year-old and Champlain Valley Union High School student trains mostly with boys. “It’s like [a girl] playing football,” her mother, Jill Spell, said, noting that there are far fewer girls and women who compete. She’s okay with the danger aspect to a certain extent, she said. “It’s fine as long as she stays on her feet.”

Muriel said she’s energized by the intensity and the competition. She said her race times are usually a good 5 or 6 seconds faster than her training runs on the same course. “I love having people next to me; it’s one of my favorite things about the sport,” she said.

Training happens every weekend with a coach in Stowe, and some Fridays, where Muriel works with Green Mountain Academy, a snowboard and freeski club. “I train in the park a lot,” she said, where she practices going over jumps and rails.

Based on her performance at Nationals last year, Muriel was invited to participate in The Hole Shot Cross Tour at Gore Mountain in New York this week. The tour’s web site describes it as “a competition designed to bridge the gap between grassroots and world cup level for Snowboardcross and Skicross. The series also brings together athletes across the country to identify the top juniors.”

As one of the youngest competitors in the tour, Muriel said she’s fine with wherever she places, but she’s looking forward to competing. “This is my first time doing a race of this scale,” Muriel said, “so I’m really just going into it with an open mind to see where I am.”