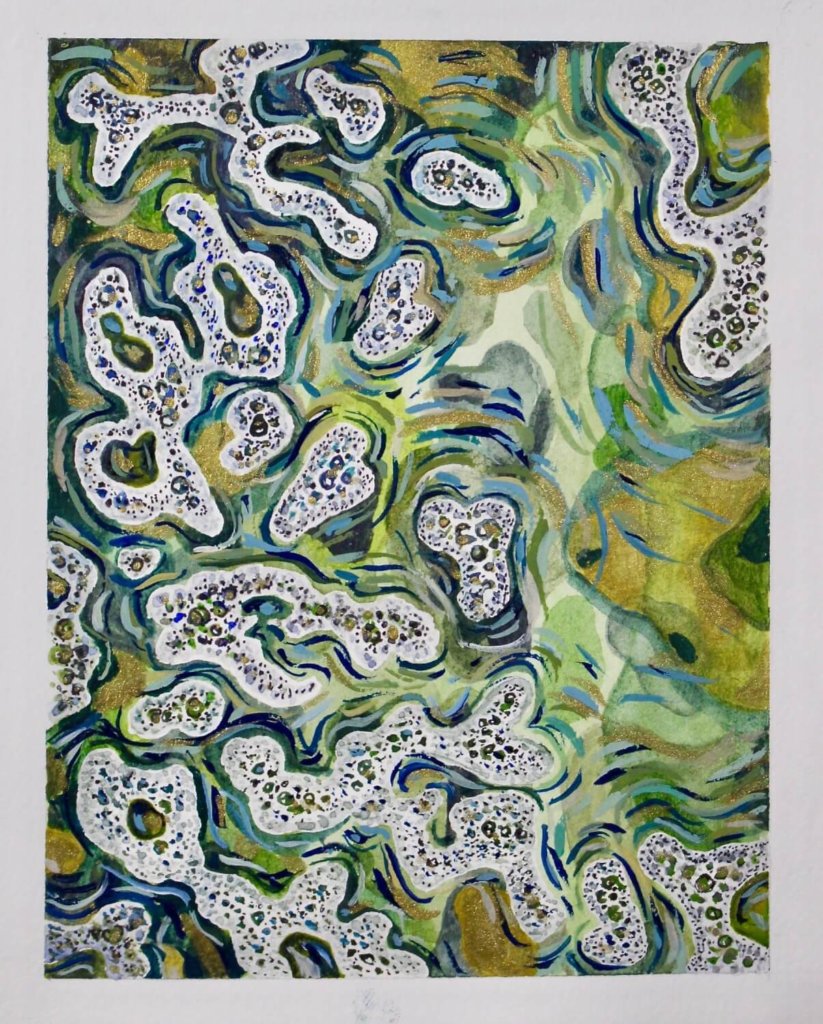 Senior Phoebe Saradnos created this artwork for notecards, and is marketing and selling the cards as part of her Grad Challenge project. She will donate the money to charity.

Since 1994, every senior who has graduated from Champlain Valley Union High School (CVU) has completed a graduation challenge project. The guidelines are very open ended, encouraging creativity and allowing students to do virtually anything they want—all for half of a credit.

Carly Rivard, CVU’s grad challenge coordinator, has been administrating the program for three years. She said, “I help organize all the materials and get the website updated.” Her main focus, though, is “organizing all of the presentation-day events, which is the most intense time in my role in grad challenge.” On May 25, the seniors will give their final presentations, a cumulative “final assessment” that is presented in front of a panel of faculty and community members.

Along with the presentation, every student must complete an annotated bibliography, letter of intent, several interviews and a final paper that wraps up their learning and experience throughout the year. If applicable, students can present their “tangible product” during the school day before their final presentation.

Rivard, when speaking on the importance of grad challenge, mentions that the program’s goal is “ensuring that all kids have a chance—at some point in their high school career—to design their own learning, and to follow a passion or interest is a really important part of that.” The academic freedom that characterizes the program results in countless unique ideas, but some of the most popular include coaching, job shadowing and internships, and art and building projects.

Rivard says that, for some students, “the presentation really is the biggest challenge, sharing their learning in front of a group that they don’t know and being up in front of a room for eight to ten minutes.” But, for some, “having these deadlines exist when there is a lot of other stuff going on” poses an issue. It’s clear that seniors are busy students, and college applications falling around the same time as many of the grad challenge deadlines can be a test for their time management. With that being said, Rivard also says that “sometimes the challenge could be in the content of the project itself.”

Phoebe Sarandos, a senior at CVU, who is designing notecards and marketing her work to make money for charity, feels as though the communication between administration and students is lacking. “I did not really receive too much instruction, and I felt that everything was sprung on me,” she says. “When I went to turn stuff in, there were things due that I had never been told by my advisor were due.” Sarandos suggests, “I think we should have had a grad challenge kick-off meeting for seniors because there hasn’t really been a central way of communicating to us what is due and when.” Sarandos isn’t the only student who feels that the assignments are unorganized.

Alden Randall, who is interning at the Kansas City Royals shadowing the senior director of event presentation and production, feels similarly. “I don’t feel that the deadlines are helpful because I can’t do my stuff until I have done my hours.” Since Randall is making the trip to Kansas City in March, he is unable to complete his hours and interact with his community consultant until then, making some of the assignments—like a draft of the final paper—almost impossible to complete. “I don’t think it should be as heavily weighted. I respect grad challenge and how it gets us out and doing real things, but I feel like the work that goes along with it is just a distraction of what can be done in school.”

Both Sarandos and Randall do believe that grad challenge is a valuable experience, although there may be some improvements to be made, and are interested in pursuing the field of their project in their future. “I think I will probably minor in business,” says Randall. “In college, I am going to be studying art and design as a minor or double major,” Sarandos said. “I do think grad challenge is valuable for us because it is self-directed learning, but I did feel at times it has been a burden,” she commented.

Lily Menk, a senior at CVU, is interning at The Charlotte News as part of her graduation challenge project.