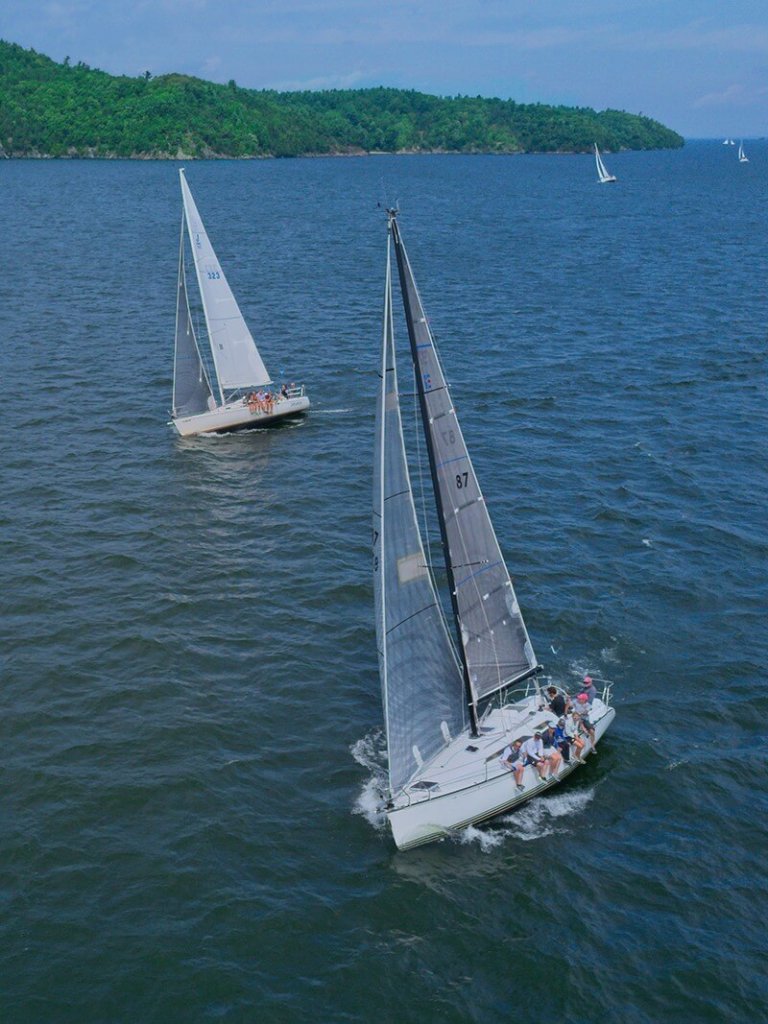 Heading upwind during the regatta.
Photo by Ramsey Hazbun

The Lake Champlain Championship Series is a summer-long series of sailboat races to determine the top competitors in six different categories, held in various spots on one of the most beautiful lakes in the world.

Over the past seven years, the Diamond Island Regatta (DIR), co-sponsored by Royal Savage Yacht Club and Point Bay Marina, has become a weekend-long celebration of sailing and lake-wide camaraderie unlike any other event on the LCCS schedule.

The seventh annual DIR got under way on August 17, at Point Bay (PBM), with a breakfast for sailors under the Royal Savage Yacht Club (RSYC) tent. There was a buzz of anticipation as competitors looked out at Town Farm Bay, where a steady southerly breeze was kicking up white caps.

Many of the sailors were wearing DIR T-shirts with their boat name printed on the back. T-shirt sales were one way the club was using to raise money for the race’s longtime beneficiary, the Lake Champlain Maritime Museum (LCMM) in Ferrisburgh, just a few miles down the lake from Point Bay. The club also held a raffle with donated prizes from LCMM, PBM, the Hinesburgh Public House, Vermont Sailing Partners and West Marine.

The final numbers aren’t in yet, but the club is hoping the amount raised for LCMM in 2019 will match the $1,000 donated in each of the past few years. Above: There was plenty of action rounding the mark near Sloop Island and heading back south to Diamond Island, during the Diamond Island Regatta on August 17. Photo by Buzz Kuhns.

Following a captains’ meeting under the tent, the race itself began just after 11:00 a.m. at the start/finish line in Town Farm Bay, south of the marina. The course took competitors southwest, into a stiff breeze and two-to-three-foot waves, to the eponymous Diamond Island; north to a mark just south of Sloop Island off Charlotte; back south to Diamond Island; and then back to the start. The race committee took advantage of the steady southerly breeze—12 to 15 knots all day—to send sailors off on the longest course among the many available, at more than 15 nautical miles.

Competitors were divided into two general categories, those who sailed with spinnakers and those who sailed only with jib and mainsail (JaM). Boats came from Vermont, New York and Canada, including the local Royal Savage Yacht Club, Lake Champlain Yacht Club (LCYC) in Shelburne, Malletts Bay Boat Club (MBBC) in Colchester, and the Valcour Sailing Club (VSC) in Plattsburgh, N.Y. Twenty-six boats started and finished, in six different classes.

Odinn, a 37-foot-long J-111 from the Valcour Sailing Club, had the fastest time for the course, finishing in one hour, 54 minutes and 53 seconds. In addition to being first to finish, Odinn won the hotly-contested Spinnaker A fleet. Said Odinn’s owner Kjell Dahlen, “RSYC runs a great race, and the Diamond Island Regatta is a premier part of the LCCS. The crew and I enjoy coming to Royal Savage Yacht Club and Point Bay. The hospitality is wonderful, and they make us feel welcome. It’s a beautiful part of the lake, and the conditions were just perfect this year.”

Seventeen boats finished in the four spinnaker classes, A through D, and nine in the two JaM classes, A and B. The classes were determined by each boat’s rating under the Performance Handicap Racing Fleet (PHRF) system, which ranks boats based on their speed potential and is used for most sailing competitions on Lake Champlain. Winners are determined based on corrected time, with the faster boats “giving time” to the slower boats.

The six class winners received trophies at the awards ceremony, held during the club’s Taste of the Islands Dinner the night of the race. The trophies used replicas of deck prisms from the whaling ship Charles W. Morgan, built in 1841, and were designed and fabricated by Treehouse Hardwoods & Millshop in South Burlington. Here are the top finishers in each division:

Complete results can be found at the Diamond Island Regatta website.

For Thomas Porter and Osprey, their win in the Spinnaker D fleet was their second straight. And for him and his crew, the DIR has become a must-make event. “The volunteers running the race and everyone at Point Bay and RSYC are so helpful, and they put on a great party and dinner,” Porter said. “Lots of boats come from all over the lake for the race and the party. It makes the whole weekend special, because you get to talk to lots of racers you usually only meet boat to boat. We’ve been lucky enough to win our division the last two years, and the prizes are really interesting and unique. And the race benefits a great non-profit, the Lake Champlain Maritime Museum.”

Porter, from Burlington, is a member at RSYC, but keeps his boat up in Shelburne Bay. “We get to sail down usually on Friday and back on Sunday, making it a summer weekend get-away,” he said. “The area around Town Farm Bay, Split Rock, Converse Bay and Diamond Island are stunningly scenic, especially the palisades on the New York shore.”

The day ended under the RSYC tent at the marina, with the awards ceremony and the inaugural Taste of the Islands Dinner, with a Caribbean theme. About 90 people attended this year’s dinner.

“RSYC is a special group of people and this day-long event—including the breakfast, the regatta and the awards dinner—is really unmatched anywhere on the lake,” said Jerry Henrichon, RSYC commodore. “The food, the festive and welcoming atmosphere, and the people all make this a terrific event. Congrats to Point Bay Marina and the many RSYC volunteers who made the day’s events possible.”

Race director Wendy Friant and former commodore Susan DeSimone described RSYC’s efforts to run a certified Clean Regatta, helping educate and mobilize sailors to protect the world’s lakes and oceans. The club used a sustainability plan developed with the help of Sailors for the Sea, an organization promoting ways to improve the health of the planet’s waters. RSYC’s co-host, Point Bay Marina, is a certified Vermont Clean Marina. DeSimone reported that race organizers collected two large containers of compostable material and another container of recyclable waste, with just one small trash container.

Wendy Friant thanked Dale Hyerstay and Keith Kennedy from the Lake Champlain Yacht Club (LCYC), who headed up the race committee. “We just couldn’t do this without them,” she said. She also noted that RSYC member Al Martin provided his powerboat, the Nancy Ann, as the Diamond Island Regatta committee boat.

Also at the awards dinner, LCMM’s executive director, Susan Evans McClure, talked about the museum’s cultural and educational missions. She spoke, too, about the discovery of the Revolutionary War-era gunboat Spitfire, almost completely intact—mast up, guns on deck—on the bottom of Lake Champlain, and the museum’s ongoing efforts to preserve the vessel.

Host Royal Savage Yacht Club is named for the Royal Savage, which served as Benedict Arnold’s flagship during Revolutionary War battles with the British on Lake Champlain. Point Bay Marina is a full-service marina on Thompson’s Point Road in Charlotte.