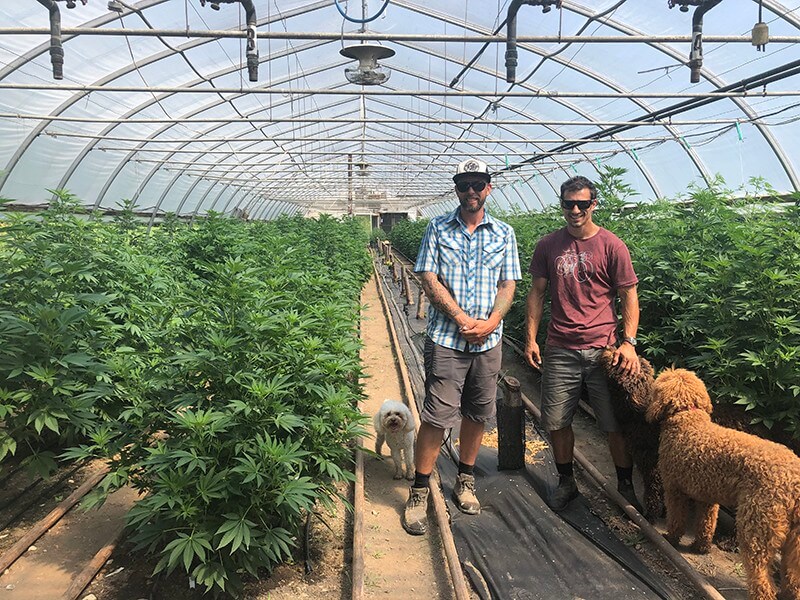 Jesse Lukas, Sebastien Poutre, and three helpful friends are growing organic hemp in Charlotte. They say that hemp is the future of farming in Vermont, and is an exciting option for small farmers. They hope to grow other plants in their greenhouses, like flowers, greens, and saffron. Photo by Chea Waters Evans. A pump attached to a generator appears to be drawing water for hemp irrigation from Thorpe Brook on East Thompson’s Point Road. Photo by Chea Waters Evans.

CBD is all the rage these days—you can’t swing a hoe in the grocery store without hitting ice cream, pet treats or body lotion with cannabidiol oil in it. All that CDB has to come from somewhere, and those with the hoes are making it happen in Charlotte. A drive up Route 7 through town reveals acre after acre of hemp plants. A hike to the top of Mt. Philo reveals, in addition to lake views and mountain vistas, row after row of hemp crops, the plastic sheeting in which they are planted glistening in the sun. Greenhouses tucked behind fields are full of the fragrant plant.

Charlotte is leaning in to a booming new farming practice in Vermont, and hemp crops are changing the landscape of farms both literally and figuratively. In an effort to expand economic opportunities for farmers, recent legislation has made permitting and regulation easy for hemp farmers; Act 143, which regulates accessory on-farm businesses and has been discussed at length at Selectboard meetings, contains laws that pertain specifically to hemp.

Hemp is identified in the Act 143 text as “the plant Cannabis sativa L. and any part of the plant, whether growing or not, with a delta-9 tetrahydrocannabinol concentration of not more than 0.3 percent on a dry weight basis.” Tetrahyrocannabinol is shortened to THC, which is the compound in hemp and cannabis plants that causes an intoxicated feeling. Growing hemp requires a permit from the Vermont Agency of Agriculture, Food and Markets and costs $25. For those who want to process the plant but not grow it, a processor permit is also available.

Sebastien Poutre and Jesse Lukas are partners in Vermont Glasshouse, LLC, and bought property on Greenbush Road in Charlotte this March from organic farmer David Miskell. They are growing around 1,000 hemp plants in greenhouses that were already on the property and primed with organic soil. The pair do not have a processor permit and plan to sell their mature plants to a local outfit that does. The plants went into the ground as seeds in April and will be harvested some time this fall.

Lukas said that they are focusing on “quality, not quantity” when it comes to their plants. “This is a very interesting, beautiful plant,” he said, “and a lot of uses have come out of it, and now that it’s legal, there’s a lot to learn.” He said they are working on a partnership with the University of Vermont, not only to help current agriculture students “but to learn how we can grow this in Vermont.”

Lukas and Poutre use the analogy that their hemp plants are more like craft beers—another popular Vermont product—and that the outdoor fields are more like the Busch beers in that they’re more mass-produced and get less individual attention.

Outdoor growing in Charlotte is a different story, one that is somewhat shrouded in mystery. Out of the four growers registered in Charlotte, Poutre was the only person who would speak on the record. He said there is nothing to hide, and that on the contrary, he and Lukas are anxious to spread the word about their plants and the possibilities.

The properties on Route 7 and East Thompson’s Point Road, the most visible of the hemp farms in town, are located on land owned by Charlotte residents Robert Mack and Peter Briggs, neither of whom has a grower or processor permit. Neither Mack nor Briggs responded to repeated requests for comment, and it is unclear who holds the grower permit for the Mack property.

Mack’s nephew, Christopher, and his wife, Lindsay Longe, who is also on the board of the Charlotte Land Trust, are, Longe said, “part of Oak Ridge Farm LLC, which is registered to grow on the East Thompson’s Point Road land east of the driveway marked 515 on East Thompson’s Point Road. The land west of there belongs to the Mack Farm…which is a completely separate operation.”

According to a current list supplied by the Agency Agriculture, there is no grower permit issued to Longe or to Christopher Mack, though he does have a processor permit registered under Oak Ridge Farm.

One person who does have a grower permit is Julian Post from Champlain Valley Hops, whose location is listed as Starksboro. Post is familiar to many Charlotte residents, particularly ones in the East Thompson’s Point Rd. area, because of a failed attempt to grow hops on the same land. Briggs owned the property during that period of time, and still does. Neighbors publicly protested the hops fields because they were worried about the amount of pesticides those particular plants require and because of the impact the tall poles the plants grow on would have on their view.

When reached by telephone, Post would not answer any questions. When asked directly if he is growing hemp on Briggs’s land on East Thompsons Point Road, Post said, “I can’t talk right now, call me in the morning.” He did not respond to phone calls the following morning.

Longe and Mack are farming that property, and she did not respond to further questions regarding their involvement with Briggs or Post. She did write in an email, “We are working hard to make this a high quality and sustainable organic ag venture. We have a deep appreciation for the land, agriculture, and our local community and look forward to being part of a growing industry.”

On a drive down E. Thompson’s Point Rd. two generators and pumps are visible from the road. They are hooked up to hoses that seem to be part of an irrigation system. One goes into a farm pond that was created when the hops farm was still in progress; the other appears to be pumping directly from Thorpe Brook, which runs through the property and underneath the road through a culvert.

The brook is part of a Class II Wetland, unique in its location so close to Lake Champlain. There has been no stream alteration permit applied for or approved for this location; wetlands are protected from this activity, though agricultural use often has allowances that supersede environmental laws.
Jaron Borg, a river management engineer with the Vermont Department of Environmental Conservation, said, “While some water withdrawals require structures that reach jurisdictional levels for a Stream Alteration Authorization it is rare that an agricultural irrigation system is large enough to do so.”

Supervising River Ecologist Jeff Crocker, who works for the Watershed Management Division, said that in this case he’s not sure agricultural exemption applies. He said that a farm’s proposal would have to be reviewed to make sure it’s compliant with DEC streamflow procedure. He added that the only way to truly know if the wetlands are being affected is to evaluate it. “My review of the irrigation system focuses on the amount of water to be taken from the river. If the irrigation system has potential impacts to the wetlands, those would be reviewed by the Vermont Department of Environmental Conservation – Wetland Program.”

The hemp law was intended to help Vermont farmers think in new ways about how their land and expertise can take them into the next decades in a way that’s financially viable. Though the law is on the side of the farmers, it is still an industry that the farmers aren’t quite ready to discuss.