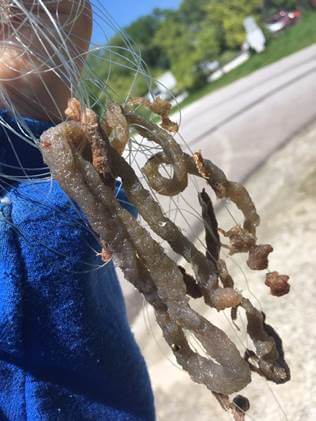 Thousands of fishhook and spiny waterfleas encrust a fishing line in June 2019, giving the appearance of a long worm. Photo contributed by LCBP.

Anglers returning from the waters of Lake Champlain at Shelburne Bay have reported large quantities of invasive fishhook waterflea fouling their gear. Boat launch stewards with the Lake Champlain Basin Program (LCBP) noted this week that nearly all fishing boats returning to the Shelburne Bay and Converse Bay launches had downriggers infested with the tiny organisms. LCBP stewards removed, treated and disposed of the fishhook waterfleas. The alarming news for anglers and lake ecology came during the busy holiday period of Canada Day on July 1 and the July 4th holiday in the U.S.

Scientists first noted fishhook waterflea (Cercopagis pengoi) in Lake Champlain in summer 2018. The species is the 51st known aquatic nonnative and invasive species in Lake Champlain. While more than 100 individual waterfleas were present in samples collected in 2018, the number of individuals found on fishing equipment in Shelburne Bay recently numbered in the thousands. The Lake Champlain Research Institute confirmed that organisms collected off of fishing lines of boats exiting the lake this week were fishhook waterfleas along with a small number of spiny waterfleas.

The fishhook waterflea is a native of Eurasia. It arrived in the Great Lakes in ballast water in the 1980s and spread to other water bodies. It likely arrived in Lake Champlain by hitchhiking overland on recreational boats, trailers, fishing lines and other equipment. The Finger Lakes in New York and Lake Ontario are the closest lakes known to host the species.

While the impact from this species to the lake’s food web is unknown, researchers have observed shifts in the zooplankton community after the detection of spiny waterflea in Lake Champlain and other lakes where the species has become established. The waterflea eggs are resistant to drying, which limits the types of management actions that will prevent the spread of this species.

Because the fishhook waterflea has life stages that are invisible to the naked eye, they are often difficult to detect. Lake users are asked to take measures to help prevent the spread of fishhook waterflea to other inland water bodies. Boaters are encouraged to clean, drain and dry their boats, trailers and equipment. They should drain bilge water and check anchor lines. Anglers should change fishing lines and tackle when moving between water bodies.

“These invasive waterfleas pose a risk not only to the ecology of our lakes and ponds but also to anglers’ enjoyment of fishing,” said Louis Porter, commissioner of the Vermont Fish and Wildlife Department. “We count on anglers and boaters both to clean, drain and dry their boats and equipment to prevent the spread of invasives. Species like the fishhook water flea are easily overlooked so closer inspection may be necessary.  Boaters and anglers are also often the first to notice when new invasives reach Vermont – thanks for taking the time to prevent the movement of invasive species around Vermont.”

No known control methods exist to eliminate fishhook waterflea once established in a water body.  Efforts will focus on preventing the spread of this species to other water bodies in the region.