Proposed library addition: A look back and a look forward

Proposed library addition: A look back and a look forward

In 2017 the Charlotte Library Trustees and the Friends of the Library decided to explore the possibility of a much-needed addition to the library building. An architect from Black River Design (highly recommended by the building’s original, architect) was hired to come up with a design and a cost estimate for the proposed addition.

A feasibility study determined the readiness of the town for the addition and assessed the level of private funds that might be available. The feasibility study indicated that the estimated cost for the addition of $1.4 million could be shared by a public bond and private monies. Private fundraising began and a bond for up to $700,000 passed by a significant margin by Australian Ballot in March 2019.

Following Town Meeting, the Library Building Committee followed the suggestion of Selectboard liaison, Fritz Tegatz, to use the architect’s plan to generate an RFP (request for proposal) to be issued to regional design/build firms. Fritz made a convincing argument that this approach provided greater flexibility and potential cost savings. (See page 4.)

On May 20, bids from three firms were opened at the Selectboard meeting. A bid review working group comprised of five local experts with extensive building experience generously donated a great deal of their time to compare and evaluate the bids. Following mandatory site visits, two of the bidding firms were invited to return to the library for comparative discussion. 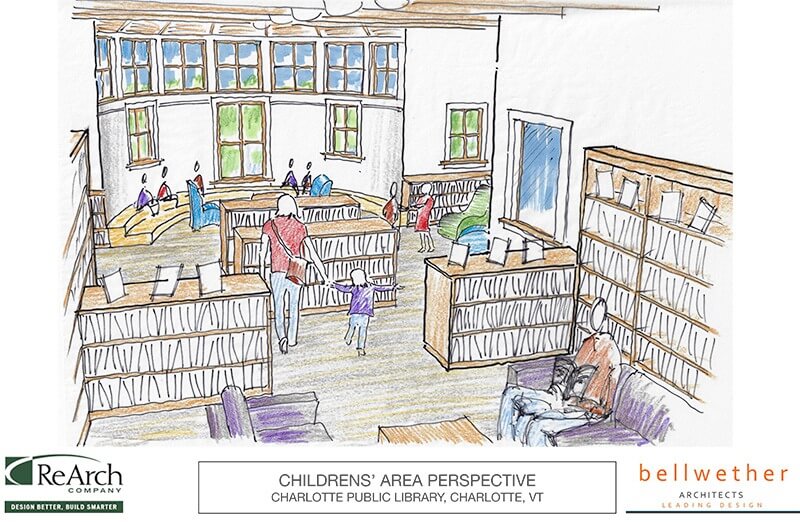 ReArch of South Burlington was the unanimous choice of the building committee based on the combination of design, feasibility, and cost. The Library Trustees unanimously approved the ReArch design (as recommended by the Library Building Committee and assessed by the bid review working group) on May 31, as did the Selectboard at its June 3 meeting.

As of June 3, the estimated cost of the project, including site preparation and construction, is just under $1.2 million. To date, during the so-called “quiet phase,” the Library Friends’ group has raised 75% of the anticipated $600,000. A town-wide appeal kicks off on June 28, with a chance for everyone to participate in a project that benefits and enriches our community.

Members of the Charlotte Library Board of Trustees are thrilled with the ReArch design, a design that accurately reflects the current aesthetic of the library as well as with the amount of effort and thought process necessary to select a design/build firm. The trustees are extremely grateful to all who have given their time and generously contributed donations to support the needed library expansion. We look forward to continued progress.