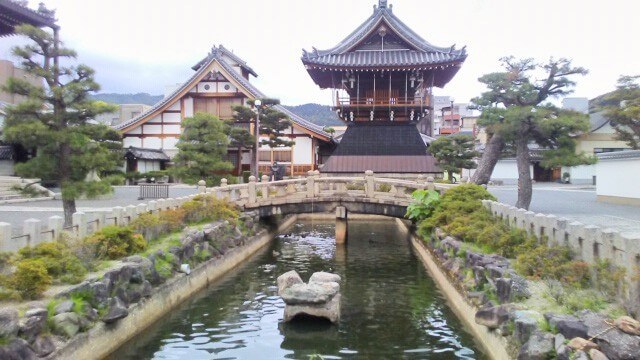 For two weeks at the end of May, my colleague Hideko Furukawa and I took nine Saint Michael’s College students on a study trip to Kyoto, Japan. The course focused on aesthetic perspectives and included hands-on experience with master artisans in ceramics, calligraphy and fabrics; a Japanese Garden workshop; attending a traditional tea ceremony, and visits to many temples and shrines.

I love taking early morning walks to let my mind and feet wander—orient myself in a directionless way and have a bit of solitude to feel the pulse of a new city. One way to learn about “place” no matter which continent or city is to get lost meandering through tiny passages between the boulevards. The following story is an example of what one might stumble upon and is excerpted from my journal and the blog we created for families back home. Yesterday morning I took an early walk in Kyoto near our hotel. After 45 minutes serendipitously making decisions at crossroads and stopping occasionally to notice juxtapositions of traditional and contemporary forms, textures, shapes and symbols, I took a turn into a temple complex, which is not hard to do given that Kyoto has some 1600 temples! I was not only greeted with architectural grandeur and ritual percussion sounds from inside Honinbo Temple where I assume the Sutra was being read, but also admired a small rectangular pond with a stone bridge and one family of ducks. Just as I was reveling in a mindful state of aesthetic reverence, a slew of professional camera men and women descended on the pond. My curiosity was piqued. Was a great monk about to appear and share some ritual or words of wisdom? Was this a keen spot for filming an upcoming movie of samurai life in the 16th century?

In a very broken conversation in English I learned that this is a once a year occurrence where the ducklings from the Honinbo Temple’s pond waddle their way through back streets to the Kamo Gawa river, the key river in Kyoto that divides west and east, a journey of about two miles. I remained transfixed while waiting to see if today was the day. No luck on my time watch…An hour later I returned to the hotel to be ready for our departure to the Murinan Garden Workshop.

That was yesterday. Today, I woke up ready for another early morning adventure. I decided to check in at the Honinbo Temple and see if my webbed friends had hit the road. I arrived and there were three people lingering over the pond: no cameras on sight. These folks chatted with each other as if something important was about to happen. I noticed one woman leave and quickly return with a can filled with beans or seeds that made noise and what looked like shredded cabbage and bread. Almost on cue the mama and papa duck waddled their way out of the pond onto the pavement. As they were checking out the scene, shaking a feather or two and sipping puddles, the 9 ducklings joined them.  With some coaxing following the rattle and the gourmet shreds of cabbage and bread the family of ducks slowly headed away from the temple. This was not a “Make Way for Duckling” moment as they curved, retreated some, moved diagonally, stopped occasionally, and then scurried once again. By this time the word was trickling out and the camera folks were back on the scene. The neighborhood doors opened with local residents joining in, helping out, and snapping cell phone photos. A few on their way to work or to school joined the modest caravan, keeping a respectful distance from the parading ducks. A police car pulled up far in front, stopped, and put on flashing lights. Soon there were multiple policemen and expanded members of the media all following along to an unpredictable pace. The police kept car traffic at bay, helped chaperone the ducks, and yes, took photos.

All of a sudden, mama and papa duck flew away. There was a moment of wide-eyed shock by we, the witnessing bystanders, and then quickly, a collaborative effort to keep the mission afloat. The adolescent ducklings waddled along not without angst and confusion. I noticed that after the parents flew away they stayed closer together. I also marveled at how the couple who seemed to be the pied pipers of this ritual had plenty of help from neighbors who provided fresh cabbage or crumbled bread to continually tempt the young ducks to keep on moving. I was struck by the multigenerational gathering. My pace was determined by ducks; there was no room for impatience. I strolled on an unexpected event that linked simplicity with awe, care with humility, and beauty with hope. I stayed nearly an hour and half watching this seemingly tiny event take place within a large metropolitan of nearly 2 million people, knowing that the slow marathon would go on for quite some time.  Until I left I was the sole Westerner to witness. I was sorry not to see the culminating flutter into the river and perhaps a feeling of relief from the caretakers who so diligently accompanied them throughout. Nonetheless, l was grateful for witnessing, and, like so many situations in our lives, I learned to let go.

Speaking of letting go, how telling it was for the mama and papa duck to lead their young ones on a path trusting that they had the stamina and the support to carry on without them. Yes, I know I am taking some liberty here, personalizing a bit, yet, how true to life. I can’t speak for duck psychology and…. I know the bittersweetness of trusting that my children will find their way without me. This happens in stages; my nest will soon be emptying as my youngest will leave for college in the fall.

I returned to the hotel, bubbling with excitement, wondering if anyone would believe my adventure. Yet, thanks to a conversation with my co-leader Hideko Furukawa, I came to realize that such an experience is not out of the norm for Japanese; the sensationalism of such an event was from my own cultural perspective. The sensitivity to beauty, the embrace of the ephemeral, the lack of self-consciousness in being caretakers, and the joy in simplicity is embedded in Zen Buddhism. I am humbly reminded that to understand other cultures it is critical to be open to worlds beyond our own prism.

At times I ponder why we hold on to patterns such as taking a directionless morning walk. Following 11 ducks on a side street in Kyoto awakened me to a spirit of humanity and the value of wanderlust.

Have you taken the survey? We want to hear from you.