CVU’s Sophie Dauerman tops the state high school tennis players
For the sixth straight year, the Redhawk women have placed a player atop the list of Vermont state tennis champions. The Joseph sisters (Kathy and Stephanie) had won five titles and Sophie, now a junior, has won this year. Playing at the Burlington Tennis Club, her closest match came in the semifinals against Woodstock’s Momo Biele, which required going to a third-set tie breaker before Sophie won 6-3, 4-6, 10-5 and moved on to overcome a freshman from Hartford, Phelan O’Keefe, in the finals 7-6, 6-3. As a result she was nominated for “Girls Athlete of the Week” in the May 28 Burlington Free Press.

Josh Ashooh pushes St. Johnsbury opponent hard for the men’s title
On the men’s side, Redhawk Josh Ashooh won his first round match 6-0,
6-1 over his Essex opponent. He took a semifinal victory as well and faced St. Johnsbury’s Mate Koszo in the finals. Pushed by Josh, the championship match went three sets until Koszo came away victorious, 3-6, 6-4, 7-6. Ian Parent at the plate against Rice. Photo by Al Frey.

Redhawk pitcher Ian Parent Gatorade player of the year
Gatorade named senior Ian Parent, CVU baseball pitcher, the state’s player of the year. This award, according to an article in the May 25 Burlington Free Press, is based on “outstanding athletic excellence, high standards of academic achievement and exemplary character demonstrated on and off the field.” In addition to his baseball prowess, Ian is a member of CVU’s Link Crew (a group of upperclassmen charged with orienting new students) and a volunteer for Special Olympics and Habitat for Humanity. Among his baseball achievements, Ian pitched a no-hitter against Rice earlier this month, throwing 103 pitches and batting in two runs himself. When not on the mound, Parent doubles as a first baseman.

Fourteen seasons as a high school coach turns your beard gray
Dave Trevithick took over as lacrosse coach of his alma mater, CVU, in 2005, a year after the Redhawks won their first of nine state championships. Since then Dave’s teams have piled victory on top of victory, bringing him his 200th win two weeks ago against Mt. Mansfield. A 1994 graduate of CVU, Trevithick was in on the beginning of the program under its first coach, Brett Lewis and the able assistance of Ed Hart. Though short in stature by today’s standards, Dave was a capable stick handler and shooter. With three brothers having played for the Hawks, the Trevithick name soon became common in that sport’s conversations. Current CVU principal Adam Bunting and he were teammates. 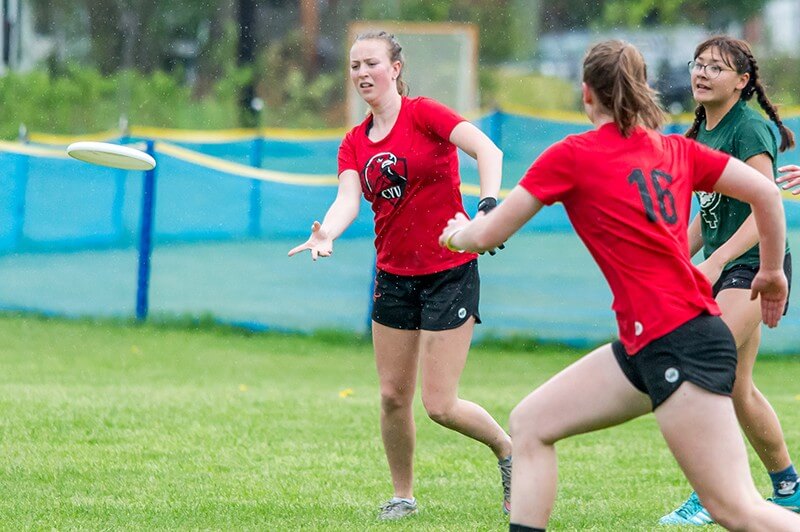 Number 16, Sophie Pidgeon, from Charlotte, gets ready to receive the disc. Photo by Al Frey.

Ultimate Frisbee has a disc drive
Ultimate Frisbee is one of the newer sports at CVU, but the players have picked it up quickly. Based on what once was simply a toss-it-back-and-forth backyard game, it has become a competitive sport. Teams play on a field similar to a football field, and the object is to get the disc into the end zone without the opponents intercepting it or the offense dropping it. Players have to stop running when they receive a pass, but they can turn and throw it to any of the other receivers on the field. They cannot hold the disc for more than 10 seconds. If that happens, the offensive team turns over the disc and goes on defense. This transition happens often in a game. In addition to the rules, the game is played without referees, and it depends on fair play called by players. The Redhawk team has won 12 games this year plus the Capital Classic Tournament in Montpelier at the beginning of May.