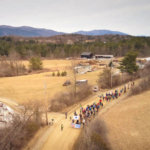 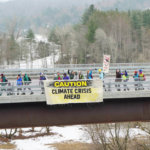 Banner drop over I-89 Middlebury exit. 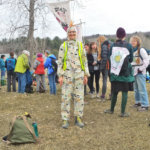 Using a visible yellow vest and a chicken suit, Catherine Bock acted as marshal to keep the walkers safe. Cathy Hunter is in the background on the right of the picture in a blue jacket. Photos by Zac Rudge 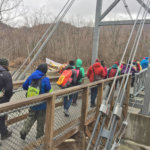 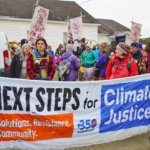 Five Charlotters participate in 350VT’s Next Steps Climate Solutions Walk
When I first heard that 350 VT was planning a five-day walk from Middlebury to Montpelier beginning in April of 2019, I immediately decided to join it. A few months later I was asked to help organize the walk, so my walk began long before the opening ceremony on the Middlebury green. Wolfger Schneider, another Charlotter, joined me for the first (and last) day as Bill McKibben ended the ceremony saying, “We’re all going to have to go on strike in one way or another, to disrupt business as usual, because it is precisely business as usual that’s wrecking the planet.”

On that note about 100 people between the ages of 2 and 85 set off towards Bristol. Three other friends from Charlotte also joined the walk for different amounts of time—April Thanhauser (one day), Mary Van Vleck (one day) and Cathy Hunter (three days). A whole middle school class walked with us for a day, adding energy and laughter. One 8-year-old boy on the walk had plenty of energy to run and play along the road until the Tesla support car came by. Then he was suddenly in need of a ride.

Together we celebrated the solutions to the climate crisis already underway, while also grieving the pipeline, ecosystem destruction and ever-growing injustices of our society.

Along the way we were received with generosity provided by local townspeople and churches. We devoured the most amazing potlucks every evening. Sleeping together on the floors of churches was no problem with the two pads I brought along. I was so tired I didn’t even notice if others snored. We quickly became a bonded tribe even as some walkers left and others joined. After walking, talking, eating, sleeping, singing and fighting wind, rain and hail together, our commitment to work for bold climate action grew.

April Thanhauser wrote: “I loved that the one day I joined the march (day 3, from Hinesburg to Richmond) began with an Earth-honoring ceremony, in which we mourned environmental losses and then stepped forward with hope for the future. The young people on the walk gave me lots of hope indeed, with their clarity, dedication and hardiness. I witnessed skillful organization, bright enthusiasm and genuine kindness all along the way, and I talked with new friends, young and older, who inspired me. Whenever I feel overwhelmed by the climate crisis or discouraged by industry and government’s slow response, I’ll remember these folks and this special day of walking together.”

Mary Van Vleck wrote: “As we walked we talked of our concerns for the earth, and how to engage people more. Our politicians, news media and all organizations such as churches need to be talking about this more and more. How is it, we asked, that some people still think that climate change is a hoax, in spite of rising oceans, disappearing glaciers, our ever more turbulent weather?”

Day 4 between Richmond and Middlesex was particularly memorable—not only because it was 19 miles with fierce winds and hail that felt like hundreds of needles on our faces but because there was no complaining. We were too busy trying not to get blown off the road. We lost track of our grand purpose and become just a bunch of people in raincoats hurrying down Route 2. Why did this have to be in April we thought? There was a reason. The legislative session ends in May so the walk was to show support for two important bills in hopes of getting them out of committee so that they will be discussed in the next session.

Each day had a theme as shown on the map, and each evening there were speakers from the communities we stayed in, sharing the climate work they were doing locally.

On the morning of day 5 we awoke in Middlesex feeling sad that it was the last day but excited to be doing an action in Montpelier. Everyone seemed wired as we watched some of our group leave with two banners to hang on the overpass over I89. The banners said “CAUTION, climate crisis ahead” (see photo) and “Your house is on fire. Greta Thunberg,” a quote from Greta Thunberg a 16-year-old Swedish climate activist who has been recently nominated for the Nobel Peace prize.

Crossing the overpass with the banners hung on both sides felt very important. The police had said they would take the banners down immediately, but they seemed to have other priorities. So many drivers on the interstate below saw them and we were able to take this picture.

After lunch in Montpelier and a gathering to inform all the newcomers of the action plan, we walked down Main Street to the Statehouse in the pouring rain. The number of walkers was now around 350. In silence we streamed in through the three doors of the building, flooding the first floor with people. We held our silence until everyone had gathered, and then, with the help of hand signals we had practiced, we simultaneously began to sing. “There are more waters rising, this I know, this I know…”

Our youth all stood in the center of the lobby, many of them holding branches of pussy willow that we had cut along the walk with messages tied to them. After the song ended, they each read a message attached to their branch, a request to the Legislature to preserve something precious, from the future for their children, to Vermont winters, to the air we breath and the water we drink. As a first step toward preservation, they called on the Legislature to pass H.51, S.66 and H.175, to ban new large-scale, fossil-fuel infrastructure and prohibit the use of eminent domain to take people’s land for fossil-fuel uses. We were pleased that Mike Yantachka, our state representative, took time out of his busy schedule to join us and witness the messages delivered by the youth in the Capital.

After the reading, the adults left the building singing again, and small groups of youth went to the rooms of the House and Senate Energy Committees and left their pussy-willow messages. Two youth leaders went to the office of Speaker of the House Mitzi Johnson and were able to speak to her. “This is not just another issue,” they told her. “We want this to be your priority. At this point, denial and delay are the same thing.”

One of our legislators called our action the most powerful protest she had ever seen.

On the last day we received a message from our 8-year-old, Tesla-loving friend: “I’m so sad I couldn’t keep walking with you. It was so much fun and I’m thinking of you. Keep going. You can do it!”