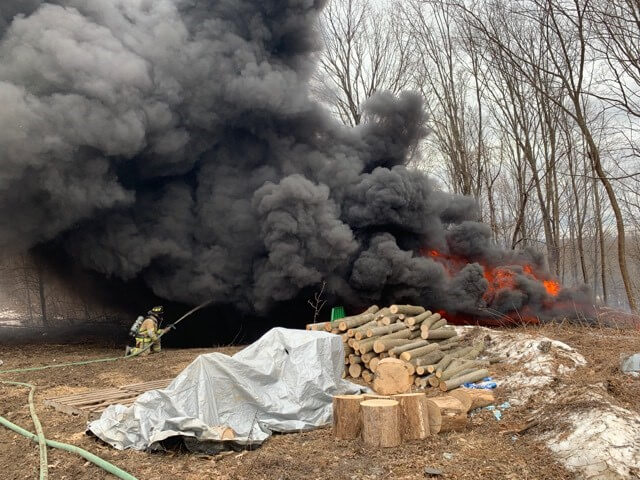 On March 21, 2019, Charlotte Fire and Rescue was dispatched to a brush pile on fire that had extended to a pile of tires. Photo by CVFRS.

The building was approximately 400 feet from paved road and had no exposures in jeopardy.  Charlotte Engine 2 arrived minutes after the call and initiated a quick attack with a 2 ½” CAFS hose line.  Personnel from Charlotte, Shelburne and Ferrisburgh were involved with the attack and tankers from Charlotte, Shelburne, Hinesburg, and Ferrisburgh were involved with the water shuttle.  A water resupply was set up at the dry hydrant at the intersection of Spear St. and Prindle Rd.

Firefighters spent approximately 2 hours extinguishing and overhauling the structure and checking for any hotspots.

This incident involved approximately 25 personnel and 7 pieces of apparatus.

On the afternoon of March 21, 2019, Charlotte Fire and Rescue was dispatched to a brush pile on fire that had extended to a tire pile.

While units were responding, a large column of dark back smoke was visible, mutual aid from Shelburne, Hinesburg and Ferrisburgh was immediately requested. The smoke column was reported to have been seen from the Burlington area.

Immediately upon arrival, it was discovered that a pile of approximately 3,000 – 5,000 tires was on fire, access was going to be difficult as the pile was in the woods approximately 1,000 feet from the road.  The only access was single track dirt path going up through the woods.  Charlotte’s small attack pumper was the only piece of apparatus that could negotiate the road.  The attack pumper had to lay all of its hose (1,100 feet) up the road, the small attack pumper was supplied by Charlotte Engine 2 from the parking lot.  A dual water supply was established with a Hinesburg engine on a Hinesburg Fire hydrant and Charlotte Engine 1 on a dry hydrant on Dorset Street.  Nine tankers from our mutual aid departments shuttled water to the scene for almost 5 hours.

The fire was attacked with two 1 ¾” CAFS handlines from the Charlotte pumper, during the incident, it was estimated that over 12,000 gallons of water and foam was put on the fire.  Crews made the initial attack on the fire and had initial knockdown in about 30 minutes, this was deep seated fire that took several hours to extinguish, and then it could only be done with the assistance of 2 excavators. At the height of the fire, there were approximately 40-50 personnel and 20 pieces of apparatus involved in the operation.  The Charlotte Fire and Rescue Auxiliary provided food and refreshments for the crews.

Again, we would like to remind all residents that in the event of an emergency, please evacuate the building and call 911.