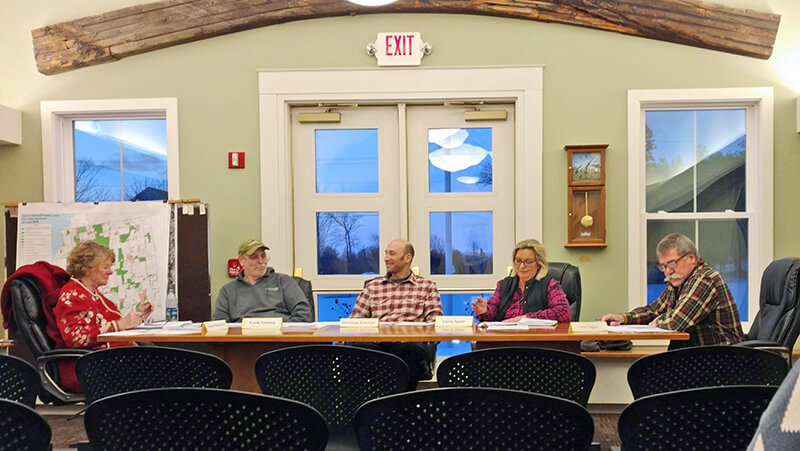 Selectboard members welcome Louise McCarren to the board during Thursday’s meeting. Photo by Juliann Phelps.

The March 7 and 11 Selectboard meetings, chaired by Matt Krasnow, began with administrative agenda items, a debrief of Town Meeting Day and setting a work plan for the year.

The March 7 meeting was brief and administrative, welcoming new Selectboard member Louise McCarren and welcoming back Frank Tenney. Krasnow was chosen to be chair, and Tenney,vice chair. In addition to determining board structure and leadership, Selectboard organization items included adopting rules of procedure, selecting the newspaper of record for town warnings, schedule of regular meetings and procedure for signing of warrants.

After a brief discussion about the length of time for public comment at the beginning of each meeting as well as during agenda items, the rules of procedure were motioned and approved with minor amendments. The Charlotte News was selected as the newspaper of record, with The Citizen and Seven Days as necessary to meet specific deadlines for other notices. Town clerk and treasurer Mary Mead was present and participated in the discussion around the signing of town warrants.

A debrief of Town Meeting Day was next on the agenda with Krasnow asking the board for feedback. Selectboard member Tenney thought it went smoothly, and Fritz Tegatz said, “No one threw tomatoes at the Selectboard,” to which McCarren replied, “That’s because they are out of season.” The board agreed that while the presentations were short, the question and answer sessions were lengthy. Krasnow asked town administrator Dean Bloch to invite the town moderator to the Selectboard meeting prior to Town Meeting “to discuss the structure and come up with a format that is a little more pre-planned.”

The March 11 meeting began with continued discussion on the draft work plan that will include updating the local emergency management plan and meeting with the Recreation Commission on the playground at the town beach and with the new Shelburne police chief to discuss police services. Selectboard member Carrie Spear proposed adding affordable housing to the work plan, and Bloch suggested adding a review of the new state road standards and revisiting the outlined management plan for the Burns property.

During public comment, Bill Stuono asked the Selectboard to consider moving Town Meeting Day to Saturday, which the board took under consideration as a future agenda item. “I’ve seen attendance at town meeting wane, and voter turnout the month after has been going down. The data is showing that it was a good idea of blending of goals, but it hasn’t panned out,” Krasnow said. “It would be great to get on future agendas.”

Tree warden Mark Dillenbeck presented his request for bids for the removal of ash trees, noting the Lake Road location was chosen for the high concentration of ash trees. McCarren questioned Dillenbeck about the process of removing the trees and what he plans to do if he finds evidence of Emerald Ash Borer. He responded, “If we are at that point, we would change our tactics.” The draft RFP was motioned and passed.

Similarly the agenda item, request for permit to conduct spraying in town highway rights-of-way was motioned and passed with little discussion, noting it would occur at the same locations as last year.

The bulk of the meeting was devoted to the agenda item: Clark Hinsdale III—proposed Open Space Agreement and Trail Easement on parcel north of Charlotte Solar installation, northwest of intersection of Hinesburg Road and Spear Street. Hinsdale opened with an overview of his proposed open space agreement, which parcels would be included and the history of how the agreement came about. He said, “Together the three forested parcels bulk up to 122 acres. …There’s been a lot of concern about the fractionalizing of woodland, making them into parcels, into something not economically big enough to do anything with.” He continued, “The other thing we did, the document says the land will be open space and imposes conditions of managing a clayplain forest.” According to the town administrator’s report, due to a deadline related to Current Use, Mr. Hinsdale would like to convey one of the parcels created by the boundary adjustment prior to April 1.

The interested party was present and introduced himself as Steve Schubart. Hinsdale said Schubart would be purchasing the former Bean farm property from him with the intent to raise cattle. McCarren asked, “[The agreement] allows for managed forest plan, who would approve that?” To which Hinsdale responded that the town could be one of the approvers. Tegatz asked if the Planning Commission had “weighed in” on the proposed open space agreement to which Bloch responded “they haven’t acted on it as a body.” The motion passed, with the condition upon Planning Commission approval.

The trails easement portion of the agenda item sparked discussion from two members of the public, as well as the Selectboard. Trails Committee Co-Chair Louise Thompson was in attendance to field related questions.

Hinsdale explained the proposed trail easement runs north and south along two of the parcels in the open space agreement, with the intent of providing access via Spear Street, and east and west along one parcel, with the intent of providing access via Hinesburg Road. Hinsdale said he has been in communication with the Trails Committee regarding the location of the trails easement. Concerns from the public included the safety of the trail exiting onto Spear Street and speeding. Thompson said they looked at sight lines on both roads, saying, “Certainly our preferred alignment would be to go up to Spear Street for safety purposes, but if that cannot happen, then the other easement on Hinesburg Road would have to be a safe second choice.” The trails easement was motioned and passed, with an amendment striking the words “trail bikes” from the document.

The meeting wound to a close with the public work session on the State Park Road   portion of the Town Link Trail rescheduled to a later date.