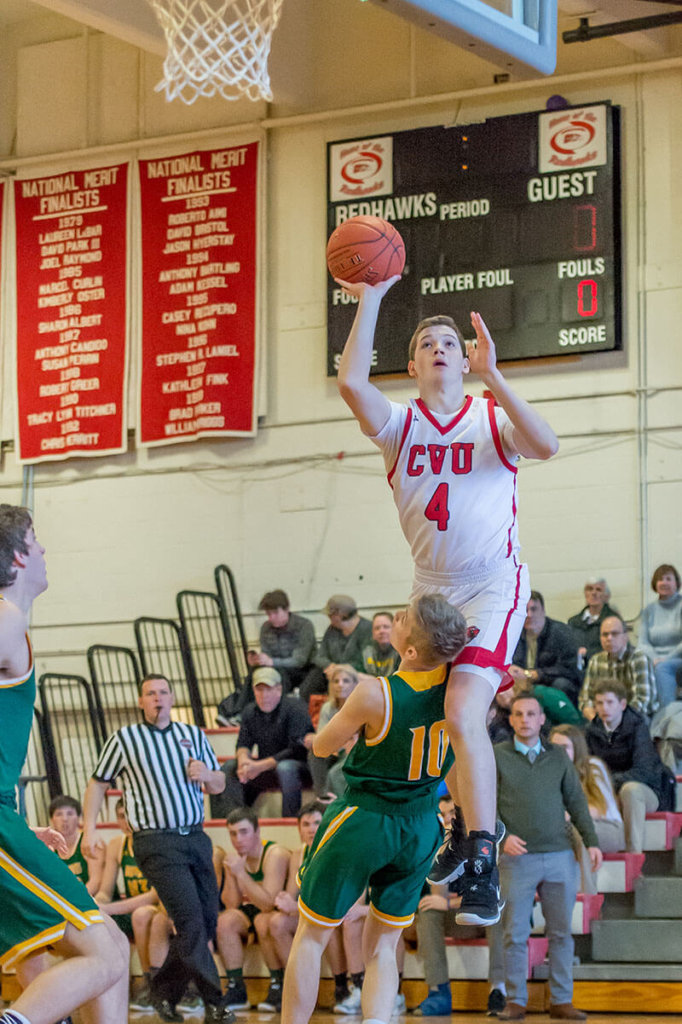 Mason Otley goes over his defenders. Photo by Al Frey.

Rink rats love it
My grandsons arrived from Providence late on Friday, and the first thing they wanted to do was collect skates and sticks and head to the rink behind Daddy’s old school. It didn’t matter that there was a bit of snow blowing or the possibility of the lights not working. Thanks to the town’s Recreation Commission, it had ice, goals and lights—the only elements needed to produce “blades of glory.”

Other skaters arrived and pretty soon the sticks formed a pile; the teams were formed and the fun began.

Often I think that this is what sports should be about. Unfortunately, they have grown beyond the boundaries of games and turned into events in which only the hard-driven athletes, power parents, overpaid coaches and win-hungry fans define the parameters. Fun of the game itself has often been lost.

That is why the rink at CCS, built and maintained by volunteers, provides a repository for sports to gain back its spirit of good play. Oh, you can play just as seriously as if you were in the TD Center, recounting the amazing moves you might have made were the snow not so deep or the ice a tad too flaky. My son forgot to bring his skates with him, but one of the features of the Charlotte rink is the box of used skates in the warming shed.

Unfortunately, the best fit for Chris was a pair of goalie skates. While he is a good skater and player, he forgot the difficulty in making sharp turns with goalie skates and set keister to ice a number of times. Perhaps he should have checked with younger brother who wore the goalie blades most of his youth to learn the ins and outs.

I myself grew up playing on rinks like the one at CCS. We played after lunch and after school. Who played against whom often depended on who did not have family duties to perform first and not necessarily who were buddies with teammates, and hockey skill ability was not always a deciding factor.
So, keep up the good work, Rec folks, and the North Country winter will handle the rest.

Downhill skiers thrive on white
Jay Peak was the site of the recent Alpine races among skiers from CVU, Lyndon and St. Johnsbury Academies and South Burlington—with several independent racers. Olivia Zubarik led the Redhawk women finishing second to Lyndon’s Lena Sauter. Emma McMahan in seventh place and Claire Goldman in ninth were other Hawks among the top ten. Charlotte’s Sean Gillam finishing fourth was the only CVU skier among the fastest 10 men.

Women hoopsters continue their winning ways
Some of the CVU women’s basketball winning margins may cause the reader to look to another medium to determine its correctness. The latest example was last week’s 69-9 win over Spaulding. A 25-0 lead in the first quarter did not hurt matters. As has been the theme this year, scoring has been spread among a number of individuals. As team leader, Charlotter Maryn Askew’s 11 points was the game high, followed by Kaylee Beyer’s 10. Catherine Gilwee played both ends of the court with six steals and seven points. Ella Woodruff, another CCS product, was strong under the boards, gathering seven rebounds.

In a rematch of last year’s state championship game, CVU had traveled to the Kingdom to play St. Johnsbury on Jan. 8 with revenge on the Redhawks’ minds. Perhaps the time to ponder on the trip helped their cause. Mekkena Boyd’s sharp shooting for a career high 18 points led CVU to a 49-40 victory and overcame its 2018 state championship loss to SJA. This, in turn, was the Academy’s first loss this season after seven victories. 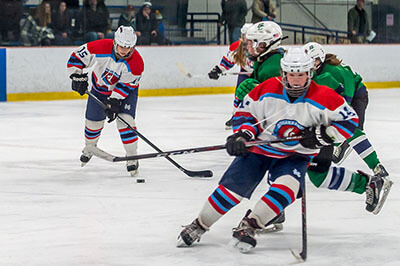 CVU’s Flynn Hall handles the puck for the Cougar/Hawks. Photo by Al Frey.