Cross Country women run in the “Big Apple”
New York’s Van Cortland Park is a pretty swath of green in the northwest Bronx, just above the Botanical Garden and the Bronx Zoo. Last Saturday, Oct. 13, its trails were the site of the Manhattan Invitational cross-country race that attracts runners from across the United States each year. As the top Vermont team, CVU joined the group of schools and demonstrated its prowess finishing third behind Claremont School from California and Liverpool High from Onondaga County, New York. As they have throughout the season, Alice Larson and Ella Whitman led the Redhawk runners. Alice finished ninth on the 2.5-mile course in less than 15 minutes. Ella was 18th and just under a minute slower than her teammate. The top five CVU runners included Chloe Silverman (42nd), Jasmine Nails (47th) and Alicia Veronneau (48th).

CVU golf champs by a stroke
Who ever thought a golf tournament would go into overtime? Well, that’s exactly what happened at the Country Club of Vermont a week ago when the Redhawks and the Bobwhites from BFA-St. Albans tied at the end of the regular rounds of the Division I state championship finals. It was the first tie in 25 years and led to the first state championship for CVU in six years. They reached the Country Club of Vermont following a qualifying stop at  the Equinox course where they also topped the field and were again followed by BFA. However, as opposed to the finals’ tie, CVU won the qualifying event by a full six strokes.

In their bid for the state title, three Redhawks shot rounds of under 80 for the 18 holes. Nate Godbout stroked a 78 and Evan Forrest plus Charlotte product Ben Gramling shot 79s. Andrew Wilkinson helped matters with a bogey on the overtime hole to help CVU nip BFA by a stroke, 20-19.

CVU keeps moving forward in women’s soccer
What does it feel like to go undefeated after 12 games? Just another day on the pitch, you say? What does it take to maintain this victory streak? In the case of the win over BFA last Wednesday, the Redhawks showed their team prowess with five players hitting the net in a 5-0 victory. They led 3-0 at the halftime break, with first period being all CVU, and mostly Charlotte, with Lilly Cazayoux and Elizah Jacobs scoring in addition to Olivia Zubarik, all within a timeframe of seven minutes. Another Charlotter, goalie Maryn Askew, made four saves against the Bobwhite keeper’s 13. Three days later Essex fell to the Redhawks, 4-0, with goals from Sydney Jimmo, Olivia Morton, Sara Kelley and Catherine Gilwee. Maryn in goal was called upon for only one save.

Men’s soccer lets in its first goal of the season
But it doesn’t matter because the Redhawks still won the game 3-1 over Colchester to remain undefeated with 10 wins and two ties. Luke Morton’s two goals in the first half, embellished by Chase Mitchell’s single tally, kept the Hawks on top of the league. They have scored 34 goals to their opponents’ one so far. And so it continues for “Soccer Central.” 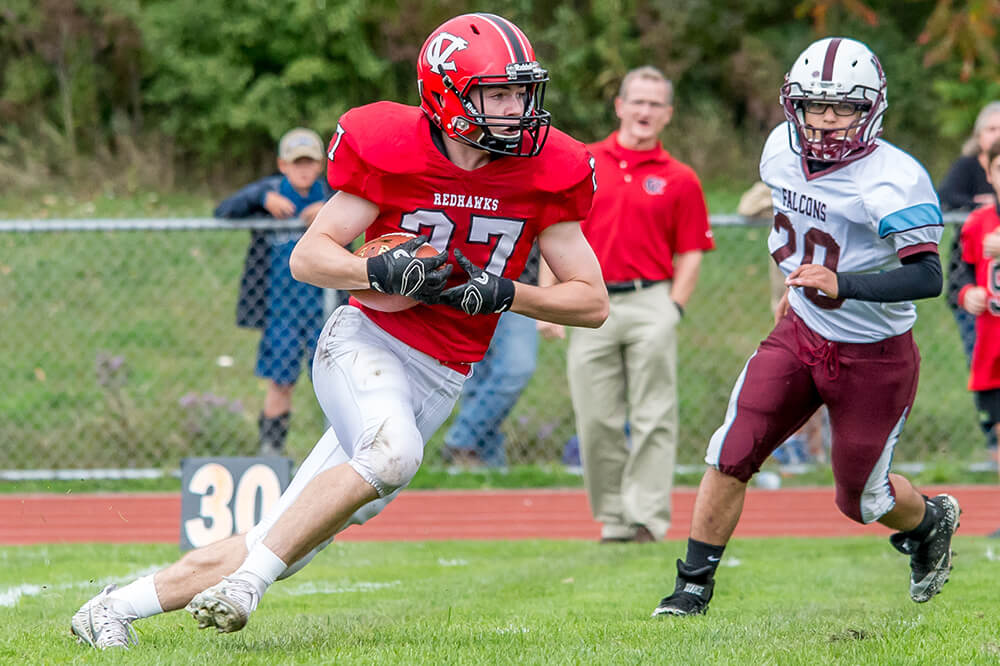 Charlotte running back Seth Boffa carries the ball for CVU in win over North Country. Photo by Al Frey

With a season’s record that stands at six wins, five losses and a tie, the Redhawks held above the 50 percent win mark by virtue of victories over U-32 and Middlebury. Tied with the Mids 0-0 at halftime, in the second frame Hailey Chase sank a penalty stroke and Nora Weisman-Rowell scored a goal for the winning tallies. CVU goal tender Kristie Carlson had a single save to the Tiger net minder’s 10.

Football goes one up, one more down
Division II North Country became CVU football’s first victim this year as Seth Boffa and Zack ZuWallack each had a pair of running touchdowns in the Redhawks’ 30-0 win. However, it took only a week for things to return to this year’s normal, a loss, this time to a strong offensive and defensive team from St. Johnsbury Academy that kept CVU out of the end zone and off the scoreboard while piling up 42 points themselves.