The Kids Cook Vt pop-up cafe at the Charlotte Congregational Church and the menus from the event. Photos by Morgan Magoon 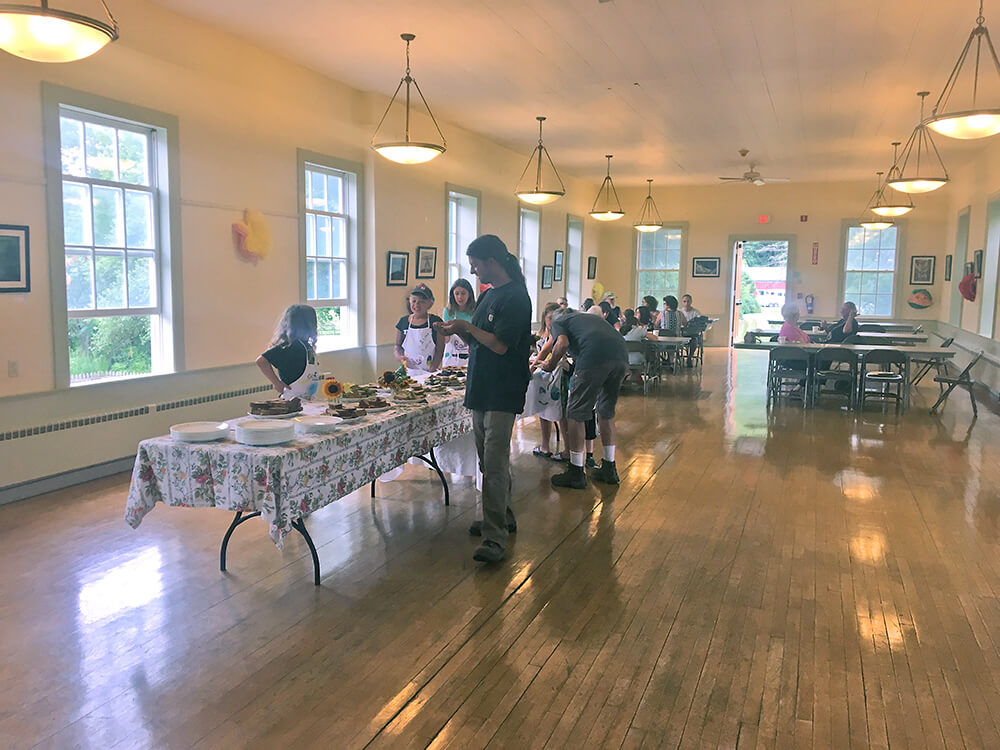 On the first day of August, campers from Kids Cook VT ran a Kids Cook pop-up cafe at the Charlotte Congregational Church. Kids Cook VT is a summer camp where kids donate what they cook to various service organizations that support people who are food insecure. The kids ran the whole event, and they did so in a professional way. The campers donned aprons that they had decorated themselves with phrases like “I love cooking” and “bake.” They wrote the menu and all the labels for the food. All the food items were priced at “pay as you wish” because the proceeds are to be used to purchase ingredients for the food donations the kids will be making for the Charlotte Food Shelf as well as the meals they will cook for service organizations.

The foods in the pop-up cafe included desserts (blueberry muffins, brownies, chocolate chip cookies and watermelon pops) and different types of sandwiches (almond butter and jelly; cucumber and cream cheese). In addition to the food items on tables, there was also a window where the campers served coleslaw, succotash and cornbread. There were vegan and gluten-free options available. Drinks included coffee and water as well as the classic Vermont beverage, switchel. All of the food was prepared with fresh, garden-grown ingredients.

The café was set up with tables where people could sit and enjoy the food they got, or customers could take their items to-go.

The kids were excited about raising money and were proud of the food they had made. “I decided to do this camp because I like that it supports the food shelf,” said a camper named Meredith. The campers raised over $350.

The previous day, the campers had gone to the Ethan Allen Homestead in Burlington. There they explored the community gardens and met the families who come to the Janet Munt Family Room, also located in Burlington. Two mornings a week in the summer, the families go to the community gardens where many of them have a garden plot. On that day the campers brought colonial-inspired dishes for the families. They had made coleslaw, succotash, salad and cornbread.

There will be a second pop-up cafe on Aug. 8 from 12:00 p.m. to 2:00 p.m. at the Charlotte Congregational Church. According to Rachel Stein and Deirdre Holmes, the women running Kids Cook VT, the second pop-up cafe may have some different foods, but it will be very similar to the first.