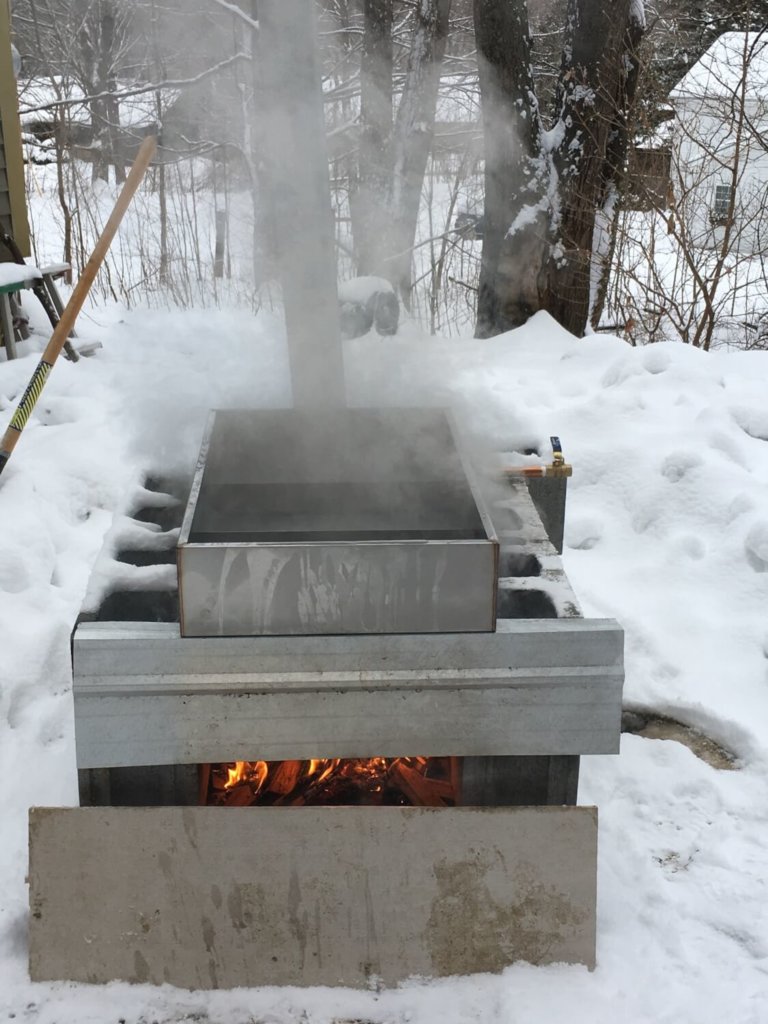 From the dark mists it was oozing, in a long steady thread of sweetness, finally. Two days after beginning the fires at my homemade arch and a week after drilling my first taps, maple syrup had arrived from my own maple trees surrounding my home. The idea was simple enough: make a gallon of syrup this year, at home. The devil, it turns out, is in the execution. But having good friends and family along for the ride makes for a memorable effort.

Just about everyone had helpful comments about maple sugaring when I announced my intended project. My friend James suggested, “You know that they sell maple syrup now, at the grocery store?” Nicole at the bank advised that it was easy. Another friend asked what kind of arch I had. “What’s an arch?” was what was rolling around in my brain, but I just said, “Not sure yet.” Turns out that’s what they call the fire source for your operation. I was going to solve that problem after I started getting my sap going.

Acquiring sap is easy. YouTube provides numerous “how-to” videos. In about 15 minutes with my 5/16ths drill bit I was in business. I bought 12 plastic taps and light blue tubing. The youngsters at Aubuchon Hardware could point me to the various plastic bits, but the rest was up to me to figure out. As it turns out there is something called “food quality plastic.” My purchase of a nice, blue recycling bin, intended to store my sap, was the wrong choice. I needed a food-quality trash container, which I got at the restaurant equipment store. Luckily a friend who has a bakery cafe provided me with smaller plastic containers. Three days later, my 35-gallon storage bin was full! In another two all my smaller pails were overflowing, so I had to figure out the means to boil.

The original thought was to boil in a single stainless sheet pan—another restaurant store purchase—on a large wood stove that I no longer use. That would be very, very slow. My son, Jo, strongly opined that you have to have the flame on the pan bottom to get it hot enough. His homemade barrel arch was up in his sugar bush where it was stored from last year. This past autumn’s fierce wind storm had felled so many trees that recovering it would be another large project. I was running out of time. Impulsively, one Friday afternoon I drove to Vermont Evaporator Company in Montpelier and bought a boiling pan, 20 x 30. This was a good move as it turned out. On Saturday I fashioned an arch out of 18 cinderblocks and tossed a pipe out of one end of the structure. Surprisingly it worked and was built to fit the fancy new pan.

Sunday would be day one. Lee came over and promptly started assessing wood supply. I used my kiln-dried hardwood, and we boiled the day’s new sap, not even touching the storage containers. My friend John appeared early and helped tend fire and collect sap. I was swimming in sap. Jo showed up to assess the operation. My friendly neighbor wandered up to check on all the smoke and commotion. My friend Jimmy came down from Burlington, and we all had a merry time taking turns with the chores of fetching and straining the sap, stoking the fire and checking the boil until the late evening. Progress was hard to see. At 10 p.m. I let the fires die down.

On Monday morning Lee was up rebuilding the arch floor (it had collapsed in the heat), dropping a dead pine and splitting it up, before I could get to the project. He had decided that pine was a faster, hotter burning wood. When I got back from my morning projects, Lee had that fire hot and the sap was boiling hard. He is a seasoned woodsman and has a rhyme for just about every type of wood. “Red pine is fine, most of the time.” Or “Elmwood burns like church yard mold, even its very flames are cold.” Lee dropped a second pine in the afternoon, announcing that he’s not really comfortable unless he’s splitting wood! Jo showed up with his rig that he had muscled down the mountain from his bush, and we set that up as the starter boil. By dusk we had a real glow going.

It helps having folks around who have seen this process before. Lee, Jo and his wife, Bay, the grandchildren—it was a good night. I learned so much: the sap turned very dark; those smallish bubbles forming foam is a great sign that you are getting somewhere. We used the spatula method to see if the sap would “sheet off.” Tasting the stuff didn’t hurt either. When we all agreed it was time, I opened the valve and out came the slow thread of product. With Jo’s preboiling set up and our slow addition to my pan of that boiling sap, we had continuous production for an hour or so. By 10 p.m. I had roughly a gallon of the good goo. We banked the fires, making sure that we had enough sap to leave in the pans so they wouldn’t scorch during the later evening.

I regret that I had not tried this much earlier in my Vermont life, when the kids were little. It’s lots of work, but slow time spent around the fire with family and friends in a common purpose, with a sweet reward, is time well spent. As it turns out I let the sap boil too long and it crystalized some by the morning. This project was not cheap, but most of the equipment is long-lasting and reusable. I suppose I will have to learn about clean-up next, and I hope there is a YouTube how-to video on that. It is my intention to enlarge, renew and move to a more perfect operation next year in Jackson Wood.