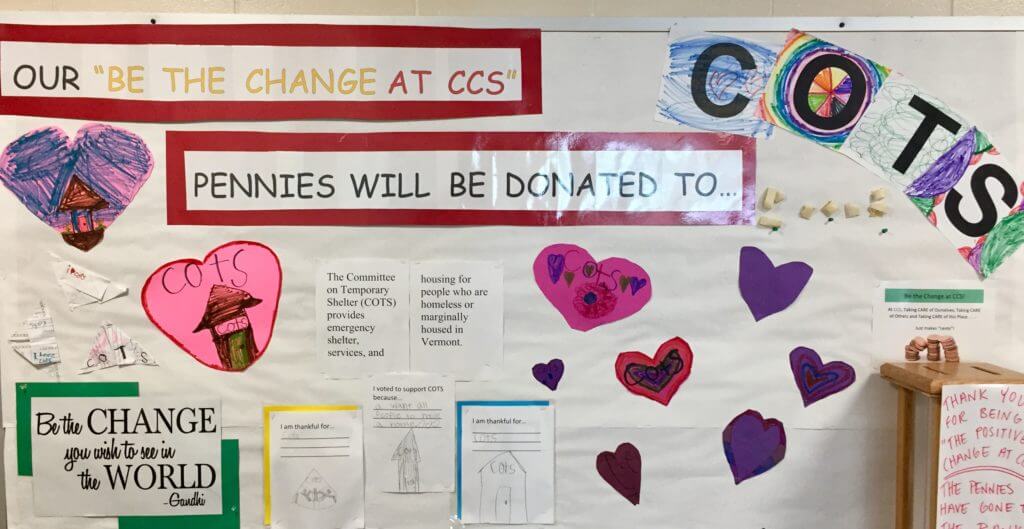 Charlotte Central School hosted “Be the Change” during the 2016-17 school year. COTS will present the Youth Hero Award for this effort at an assembly on Nov. 17.

A total of $185 was raised throughout the 2016-17 school year at Charlotte Central School through its “Be the Change” program. The school received the Committee on Temporary Shelter (COTS) Youth Hero Award for that effort, which will be presented at a school assembly on Nov. 17.

COTS hosted its annual meeting and volunteer appreciation breakfast on Friday, Oct. 27, at the First Congregational Church of Burlington. The event is an opportunity to honor the extraordinary contributions by volunteers, community partners and local businesses that support COTS’s work to end homelessness. The recipients were chosen for their outstanding service and commitment to assist and advocate for our neighbors struggling with homelessness or those who are marginally housed.

This year CCS implemented a school-wide “Be the Change” program in an effort to recognize students’ positive behavior. Throughout the 2016-17 school year, a student’s positive action was acknowledged by a penny. Pennies were then added to a classroom collection jar and then, ultimately, to the school-wide penny bank in the main lobby. This past June, all those positive pennies were donated to COTS at a year-end assembly. The students wanted to show that “a little goes a long way.”