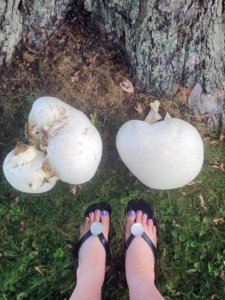 It’s been a spectacular fall for all sorts of edible mushrooms like these puff mushrooms. Photo by Melissa Write of Addison.

Audubon Vermont teacher/naturalist Gwen Causer said it’s been spectacular weather for all sorts of edible mushrooms. “The rain we had in early September is paying off now,” she said.

This image captured by Melissa Write of large puff mushrooms at her home in Addison is similar to many posts on social media that have sparked a unintentional contest of sorts as to who has the biggest soccer-ball-type mushroom on their front lawn.

Kids love dissecting these because when they pop them open mysterious smoke (mushroom spores) appears. But why are they so big, plentiful and popular this year? Well these humor-inciting finds love sunshine. Add to that, more rain means more mushrooms in general.

Ari Rockland Miller, Vermont’s expert mushroom forager, said the white flesh of these mushrooms is edible. But the jury is out on those of us who have issues with texture. Puff mushrooms have a consistency a bit like Styrofoam. Make sure to note these are much tastier at the start of the season—by late fall they are better used to dish up some fun conversation rather than on any plate for eating.