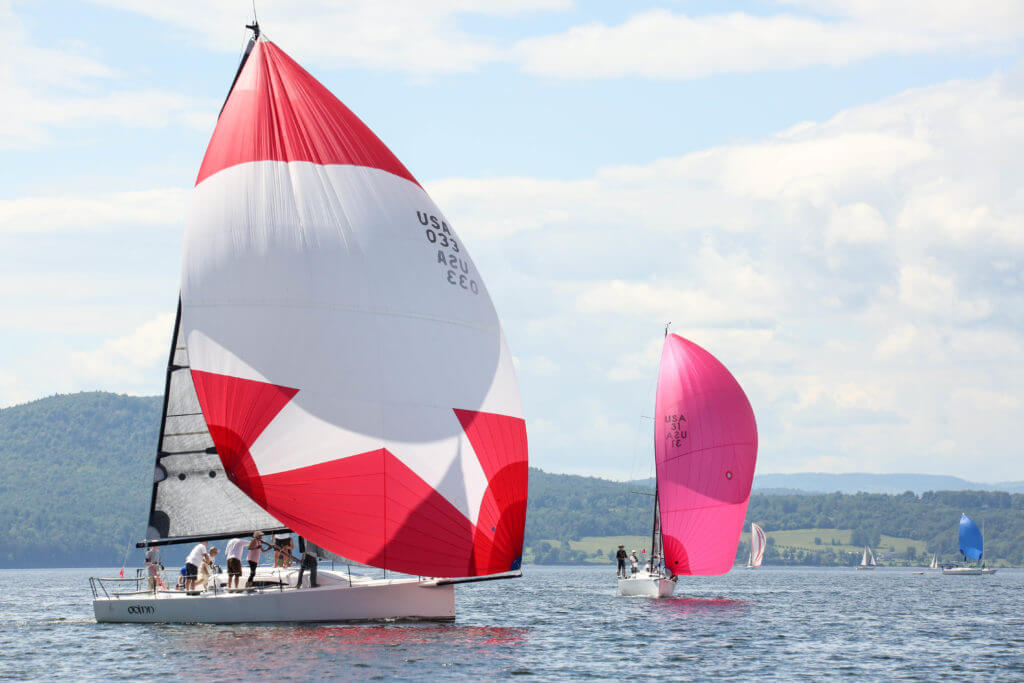 Heading downwind during the 2017 Diamond Island Regatta on Aug. 19. Photo by Buzz Kuhns.

The race, which in its five years has become one of the favorites of Lake Champlain sailors, began just after 11:00 a.m., took competitors south from the start/finish line in Town Farm Bay to Diamond Island off Ferrisburgh, north to Sloop Island off Charlotte, back south to Diamond Island and then to the finish. The fastest time for the course of about 15 miles was just over two and a half hours. The race began in a southerly breeze that came and went throughout the day, dropping to a whisper at times but topping out at 15 knots.

For racers and club members, the day began and ended under the RSYC tent at the marina, starting with a pre-race breakfast and wrapping up with the awards ceremony at the club’s annual Lobster Fest. About 100 people attended this year’s dinner.

“Our thanks go to all those who sailed and everyone who attended the Lobster Fest for their support of the club and the Lake Champlain Maritime Museum,” said Gary Russell, RSYC commodore. “And kudos to Point Bay Marina and the many RSYC volunteers who made the day’s events possible. Thanks also to Dale Hyerstay, Keith Kennedy and Kathy Manning from the Lake Champlain Yacht Club (LCYC), who headed up the race committee. And they, and we, were thrilled that again this year RSYC member Al Martin provided his boat, the Nancy Ann, as the Diamond Island Regatta committee boat.”

As has been the case for all five editions of the race, entry was free. RSYC makes a donation of $1,000 to LCMM, made possible in part via the sale of Diamond Island Regatta logo items to racers and fans, and also through the sale to competitors of race photos, taken by professional photographer Buzz Kuhns. LCMM also raises some money on the day of the regatta through the sale of museum-themed items—including hats, pint glasses and books—at the breakfast and the Lobster Fest. This year, LCMM’s Helena Van Voorst attended the awards dinner and handed out day passes to the museum to racers and club members. The Diamond Island Regatta race director this year was RSYC’s Steve Koch, assisted by Wendy Friant, past RSYC commodore and founder of the Diamond Island Regatta.

In the race itself, competitors were divided into two general categories, those who sailed with spinnakers and those who sailed only with jib and mainsail (JaM). Boats came from the local Royal Savage Yacht Club, Lake Champlain Yacht Club in Shelburne, Malletts Bay Boat Club in Colchester, Valcour Sailing Club in Plattsburgh, New York, the Point au Fer Sailing Club near Rouses Point, New York, and elsewhere on the lake.

There were 16 boats in the four spinnaker fleets, A through D, and 14 in the two JaM fleets, A and B. The fleets were determined by each boat’s rating under the Performance Handicap Racing Fleet system, which ranks boats based on their speed potential and is used for most sailing competitions on Lake Champlain. Winners are determined based on corrected time, with the faster boats “giving time” to the slower boats. The six fleet winners this year received trophies at the awards ceremony held during the Lobster Fest dinner. The trophies were historic replica deck prisms from the LCMM gift shop, with custom settings created by Erik Cooper of M//E Design in Burlington. Here are the top three in each division:

Courbeau, in the Spinnaker A fleet, was also the first boat to cross the finish line, with an elapsed time of two hours and 32 minutes. RSYC sailors captured three of the six fleets, and made up the entire eight-boat JaM B fleet.

Complete results can be found at the RSYC website.