Farm Series: Cathy and “the boys” at Unity Farm

Farm Series: Cathy and “the boys” at Unity Farm 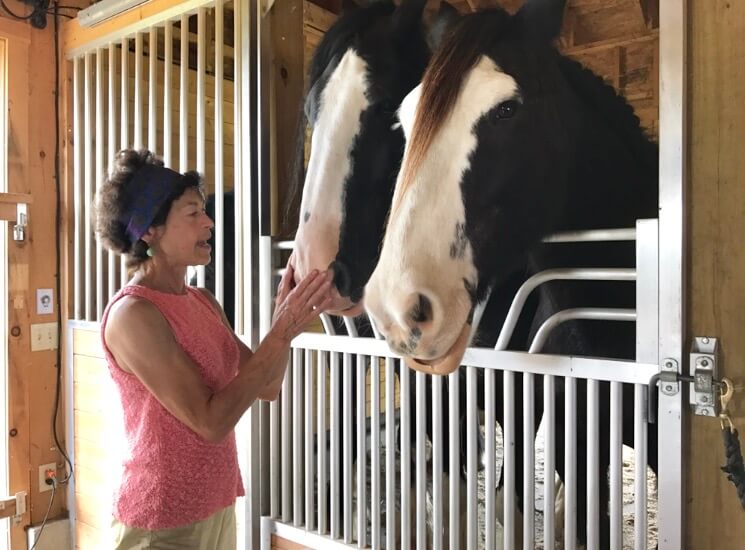 Cathy Wells and her boys at Unity Farm. Courtesy photo.

Editor’s note: In an effort to support local farmers the Charlotte Grange has volunteered to feature a new farm story each month in The Charlotte News. Here is part four of the series. Enjoy!

“The boys needed work,” Cathy Wells yelled. The four boys she was referring to have a very interesting skill set—they can pull farm equipment, wagons and sleighs. They work in any weather, any season and are very reliable, but they needed a job and a place to live. And they are not small boys—each weighs between 1,700 and 2,000 pounds.

Living and working at Shelburne Farms had given Cathy her return to horses, now with English Shire draft horses, and she had two teams, Pete and Jaguar, General and Rocket. These “boys” worked at Shelburne Farms in the fields and provided guests with horse-drawn tours of the farm on a wagon or sleigh. In 2012, Cathy and her boys were moving, and she wanted a place where the two teams would continue to work. Thus, Unity Farm was born. Buying 54 acres from Clark Hinsdale was step one. The acreage was an empty field used for hay and corn, but with no infrastructure. Creating Unity Farms became an ongoing project, one that continues to evolve.

Cathy Wells grew up in a farming area in Indiana, helping her grandparents with their vegetable garden. So, although she had never farmed herself when she started Unity Farm, the concept of farming was not totally unfamiliar. Having owned and ridden horses growing up, getting the draft horses was an easy transition for Cathy. Falling in love with the easy-going temperaments of the Shires, she started with one team, ultimately acquiring a second as one of the original team needed frequent vacations from work. A landscape architect by trade and having the mindset of “working together” to create something better, Cathy took the empty field and has, over time, created a partnership with the land. And Trooper, an 11-week-old purebred Shiloh Shepard, who is also Cathy’s therapy dog, is testimony to Cathy’s ongoing desire to partner with “all” in her world.

With the vision of building a sustainable ecosystem, every decision at the farm is made with that partnership in mind. Natural springs kept the east side of the property wet, and that wetland was starting to grow. Cathy built two ponds that now contain the springs so the rest of the land is usable, and the ponds provide homes to frogs and turtles. The farm is open to southwest wind, so she looked for edible windbreaks—and planted currants, aronia, hazelnuts and elderberry bushes. Her location, between Mt. Philo and Pease Mountain, is a wildlife corridor for bobcat and deer. They need to eat. Unity Farm provides them with edible cover crops like radishes and turnips.

John Hayden from The Farm Between in Jeffersonville has worked with Cathy to encourage natural pollinators to Unity Farm. Thus, the farm has some bee hives, butterfly bushes, black locusts, hawthorn trees, Echinacea and other flowers that attract birds, bees and other insect predators like praying mantises, walking sticks, toads and snakes. A brush pile has been created to function as winter protection for predator wasps—along with voles, moles and rabbits. Plants that are either a bug deterrent or actually attract bugs, like Alyssum or radishes, are planted in the various hoop houses. If her radish plants are being eaten, she knows there are bugs in that house. Educating herself on how to improve the ecosystem, Unity Farm continues to evolve.

Starting with the goal of growing greens year around, Unity Farm now has one greenhouse for propagation and three hoop houses with beds between them. After a year of just growing greens in the winter, Cathy discovered she needed to expand her horizons beyond simply selling winter greens. Kale, Swiss chard, spinach, arugula, mustard greens, lettuce, mint and parsley now share the hoop houses with flowers. Perennials and other flowers that will attract insect predators grow both in the hoop houses and in beds outside. Both the flowers and vegetables are wholesaled to local markets, restaurants and caterers. The Unity Farm van can be seen every day during the growing season and two days a week during the winter making deliveries.

Cathy’s basic premise of “partnering” carries over to her customers, as she strives to develop good relationships with them, recognizing that as their needs and wants change, she also has to change. This is especially true in flowers, where trends come and go and the popular colors can change. In addition, farming brings its own set of variables with the changing seasons, the weather, the ever-changing climate; each of these brings different challenges in how the plants, either flowers or vegetables, will be affected.

Cathy knows she has to look constantly for new opportunities on how to use the land and sell and promote her own products. She also knows she needs to be prepared to change course midstream when Mother Nature throws a curve ball. This year she had to find creative ways to use flowers that set their buds way earlier than usual because of the unexpected hot spell we had in early spring. These flowers, normally suitable for large table centerpieces, suddenly had very short stems. Quick on her feet and with a creative mind, Cathy found ways to use and market them. Recognizing that as a small farm she needed to learn how to work with other farms in the area, she and another farm decided “to join product” to sell their black currants to a winery. Along with another farmer, Red Wagon Plants leases some of the land to grow its own products. Part of the property is an organic hay field where the boys do all the work except for baling.

The original goal of finding a place for the boys to work and growing greens available year around (no small feat in Vermont!) has grown into a beautiful, small farm full of color from the various flowers and bushes producing both greens, flowers and berries all year for local markets, restaurants and caterers. Cathy herself has become both learned and proficient at dealing with the changing seasons, the vagarious weather and the decreasing light, adjusting planting times to make full use of the growing cycle to cover the time from late December until mid-February when nature rests. Her customers know that produce and flowers from Unity Farm will still be on their shelves 52 weeks of the year.

The horseshoe, which is the “U” in Unity Farms, symbolizes the partnership Cathy has with her animals, but her words taken from her website Unityfarmvt.com best describe her relationship with her world: Our vision for Unity Farm is to unify the needs of everyone who lives and works here in a sustainable and harmonious way— people, domestic animals, wild animals as well as our cultivated land and the natural environment.

Protect yourself from holiday shopping scams