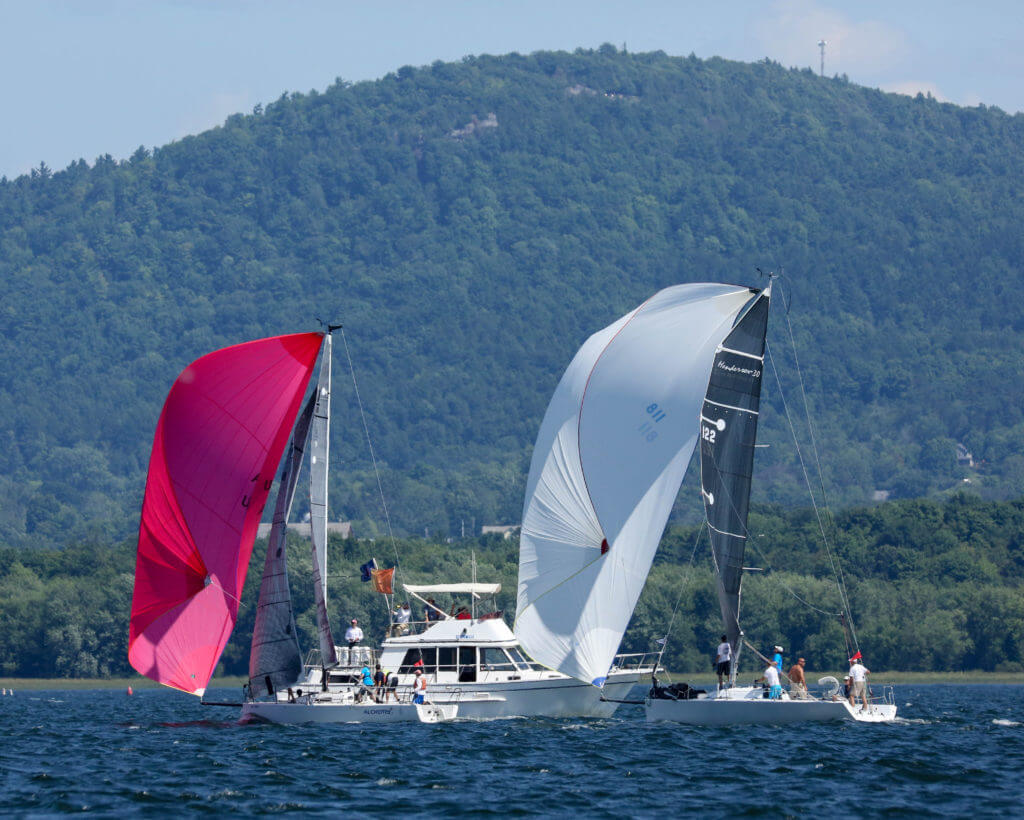 Dueling spinnakers highlight a near photo finish at the end of the Diamond Island Regatta in 2016. Photo by Buzz Kuhns.

Many of the top sailors and fastest boats on Lake Champlain will be taking part August 19 in the 2017 Diamond Island Regatta, hosted by the Royal Savage Yacht Club (RSYC) and Point Bay Marina.

Again this year, proceeds from the event will benefit the Lake Champlain Maritime Museum (LCMM) in Ferrisburgh. LCMM is dedicated to maritime education and the preservation and management of the lake’s historical shipwrecks and underwater cultural resources. Entry for the fifth annual Diamond Island Regatta will be free, with money raised through the sale of race-themed merchandise to sailors and racing fans, and the sale of professional photographs of the boats taking part in the race. Last year, the regatta raised more than $1,000 for the museum.

In just five years, RSYC’s Diamond Island Regatta has become one of the biggest sailing regattas on the Lake Champlain summer schedule; last year, the event attracted more than 30 boats. The race is part of the Lake Champlain Championship Series (LCCS), a series of races featuring boats from clubs in Vermont, New York and Quebec. Regatta results will count toward both the LCCS Cannon Series and the Champlain Series. Details and registration info for the regatta can be found at RYSC. Learn more about the LCCS at their website.

Racers are invited to a breakfast (free for RSYC members and $5 for visiting sailors) the day of the race at the RSYC tent at Point Bay Marina. Breakfast begins at 8:30 a.m., with registration from 8:30 a.m. – 9:30 a.m. and a skippers meeting at 9:30 a.m. The race gets under way at 11. The awards ceremony will take place at the annual RSYC Lobster Fest, also under the tent, at 6 p.m. Visiting sailors are invited to join the evening festivities, paying the RSYC member price of $25 for a whole lobster, steamers, corn and all the fixings. To reserve your place for Lobster Fest, please sign up by Aug. 17 at the RSYC website.

The race is scored using the Lake Champlain PHRF ratings, which allow sailboats of all sizes and speeds to compete against one another. The event will include separate classes for boats flying spinnakers and those using just mainsail and jib, but all boats will sail the same course, chosen from among several options on the day of the race based on the wind direction and speed. The courses, all starting in Town Farm Bay, which sits between Charlotte and Ferrisburgh, range in length from 6.6 to 13.8 nautical miles, and can run from Charlotte and Essex, N.Y., in the north to Basin Harbor in the south.