Charlotte seniors cruise with the Martins

Charlotte seniors cruise with the Martins 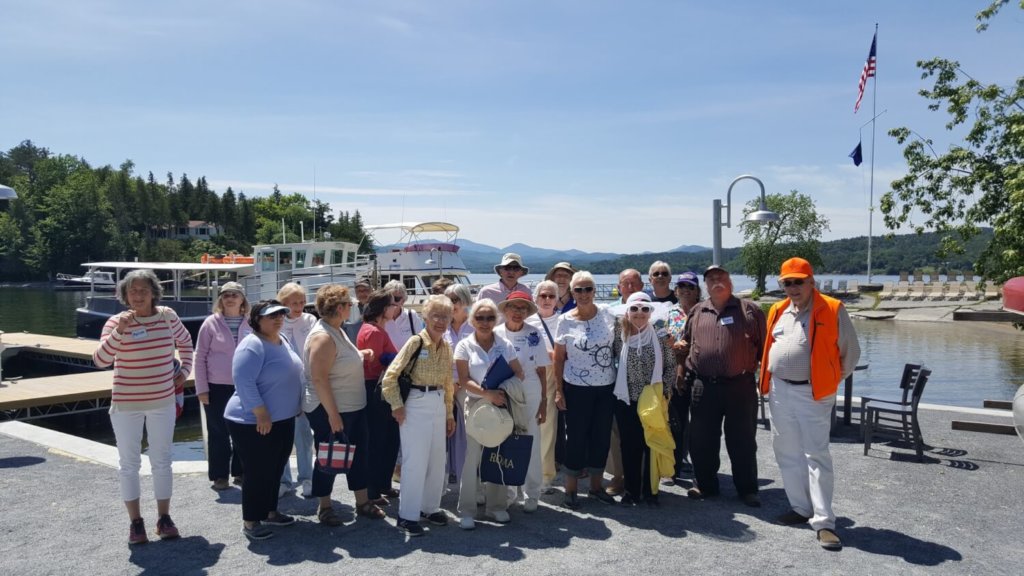 The voyagers of the Dream Day on the Lake, June 15, offered by Allen and Nancy Martin. Courtesy photo.

With the words “Cast off all lines,” Captain Al Martin set sail once again from Point Bay Marina last Thursday morning headed for Vergennes. The cruise, part of a series around the lake sponsored by the Charlotte Senior Center, was much anticipated and fully booked. Last year the Otter Creek was too shallow to accommodate Martin’s 42-foot trawler yacht, the Nancy Ann, which draws three-and-a-half feet. Nancy Ann normally makes four such cruises a summer with a typical passenger list of 20 plus four crew.

The cruises are a favorite element of the Charlotte Senior Center’s summer program, and Captain Martin revels in the chance to sail up and down the lake regaling his cruisers with stories and history. He’s been doing it for 16 years and seems to enjoy it as much as his passengers. His former role as owner and towing operator of the Point Bay Marina required him to obtain a Coast Guard 100-ton captain’s license, so he has a wealth of boat experience, which he willingly shares with the large group of cruise members who cluster about him on the flying bridge.

The cruise up Otter Creek, Vermont’s longest river, is one of Martin’s favorites. The Otter Creek is full of history beginning at the mouth, where Fort Cassin is found. Little known, Fort Cassin was an earthen redoubt on which seven 12-pounder cannons were mounted to protect the mouth of the creek. Little remains of the “fort,” though some of the remnants of the earthworks can be seen from the lake. A two-hour battle was fought there in 1814 to protect the American fleet being built and homeported in Vergennes by Captain Thomas Macdonough. This fleet was later to take part in the pivotal battle of Plattsburgh, in which the British fleet was defeated. The battle of Plattsburgh is often noted as the most important naval battle in the War of 1812 and gave the young American country a more powerful position in the negotiations leading to the Treaty of Ghent that ended the conflict in December of 1814. The name “Cassin” was given to the fort in recognition of Lieutenant Stephen Cassin, who played a key role in the defeat of the British.

The cruise up the lower seven miles of the creek included a picnic lunch stop across from the site of the Vergennes shipyard. Here the visitors were treated to further discussions of Macdonough’s fleet and the spectacular sight of the Vergennes Falls, which were in full spate following the heavy rains of the past weeks. The creek is broad and deep, allowing Captain Martin the opportunity to entertain his passengers with stories of various points of interest along the shorelines. The cruise included numerous wildlife sightings.

Martin’s wife, Nancy, quietly served as first mate, complementing many of her captain’s stories with humorous elements of candor. Another key player was the designated “swabbie,” Greg Smith, who seemed to be everywhere aboard, catering to the needs of passengers, particularly during the embarkation and mooring evolutions. It should be noted that the Martins provide this service several times a summer for free to seniors of the community, and they are to be commended for their community service.