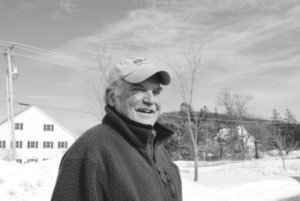 Saint Patrick’s Day brings everything green to the fore. Even my secretary changed the sign on her desk to read “Helen O’Dondiego” lest we forget that being Irish is safer than being Italian on Staten Island this day each year. My “whispering Irish” boss (a former nun named McCormick) in the office next to Helen hung shamrocks from her ceiling, remarking that one reason she left the order was that it sent her to South America where she encountered a watered-down Paddy celebration. What’s a McCormick to do with lean green?

The Chicago River flows green until the pigment sinks into Lake Michigan only to blossom as green sturgeons six feet long singing “Hail to the Fighting Irish.” And South Bend goes Dublin for the day.

Everyone pulls out his or her Irish Tenors and Celtic Thunder CDs. Those who remember their Gaelic brogue curl their tongues and pretend to harmonize as though they were in Trinity Cathedral.

New York City was my Saint Patrick’s haven. Our neighbor McGowan led us around to the pubs. A college dean, he needed to find places where he wouldn’t be recognized. That meant some pretty shoddy downtown whiskey holes or little-known Irish pubs in the boroughs. My friend Ron, a professional French Horn player from western Iowa (hardly an Irish stronghold), come March turned his big-belled instrument in for a set of uilleann pipes and played music from The Chieftains, U2, Sinead O’Connor, The Pogues, or The Cranberries, and stuck to draft beer from across the Atlantic Pond. We listened to the Dropkick Murphy’s turn the often lugubrious “Fields of Athenry” into something close to Celtic rock and roll – the potato famine be damned, this is drums and bells of Belfast, which, by the way, we learn from listening to his music is where Andy Irvine wishes he was, and Maura O’Connell dreams of the “Isle of Malachy” and being “Down by the Sally Gardens.”

I don’t know for sure, but my bet is that Mar el Largo turns Mar “O’Largo” with green water in the pool because Trump wants to buy his way to the center of history, even though I doubt that he and Saint Patrick share much in common, probably not even a tinted top. Rumor has it that an opened valve draws water into a pipe that runs out the roof of Trump Tower spraying green rain on the streets below.

“Trump, Trump, Trump the boys are marching” seems to be a fairly common mantra these days, so what better way to give it credence than by combining it with a religious holiday. Me? I’ll just settle for a draft.

Marching up the street below the tower is likely to be a Saint Patrick’s Day parade, and I’m a big parade fan. My son and his wife lived on the Mardi Gras route in New Orleans. In my hometown, every Friday after the stores closed, the hot rods “paraded” our city’s main street. Many of the drivers didn’t get older; they just changed mufflers. Charlotte doesn’t have its own parade on Saint Paddy’s Day. Its residents spread their wealth among neighboring towns and designated drivers.

Although Saint Patrick was a fifth century missionary and bishop in Ireland, it took 12 centuries to attach his name to an official holiday, March 17, the day of his death. After spending time in Ireland, Patrick went back to Britain before returning to convert the native Irish pagans (Druids). Some people believe that he also drove the snakes out, even though scholars testify that there were none there to begin with. My Scots ancestors knew the critters preferred single malt liquor over Irish whiskey, and they invited them to Loch Ness where the snakes and the Monster drank together peacefully.

Are snakes a turning point, and is our current president trying to drive them into extinction in this country, too? What do you bet, though, that they can slither through holes in the wall from Mexico?

Maybe he’ll send them to Russia (Although we’re trying to convince the Russians to become our allies aren’t we?). The Russian spin-doctors would probably claim the snakes were Hillary’s doing, and their venom contaminated Trump’s Garden of Eden.

Saint Patrick’s name often comes up in pub chatter. We spent time in a Dublin pub several years ago clapping to the bodhran and singing Irish songs, tipping Guinness at room temperature and speaking an English dialect nobody else in the place understood — although we weren’t hesitant to bless Saint Paddy if it brought another round to our table.

Three-pronged shamrocks symbolized the Holy Trinity to pagans. Wearing one on your hat shows that you still hold to that paradigm, which, come to think of it, do you suppose these evil immigrants from Mexico do as well? Our president doesn’t think that a shamrock alone will keep them where they belong. A wall, on the other hand – now there’s a thought.